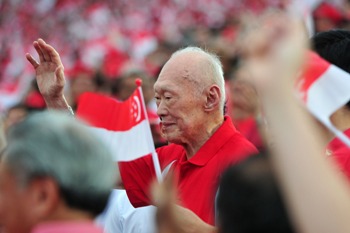 Lee Kuan Yew, the first prime minister of Singapore, and one of the most influential political figures in Asia died here on Monday after a prolonged battle with pneumonia.

Born on September 16, 1923, he was widely considered as the father of the modern day Singapore and the leader who made the island nation the most prosperous in Southeast Asia.

Lee was born into a wealthy Chinese family that had lived in Singapore since the 19th century. He did his schooling in Singapore before studying law in the University of Cambridge in Britain. In 1950, Lee was admitted to the English bar, but chose to return to Singapore, instead of pursuing a career in Britain.

While in Britain, Lee embraced the ideology of socialism. In the early 1950s, he allied with individuals like David Saul Marshall and Lim Yew Hock and raised the pitch for a constitutional reform in the country.

Singapore, at that time, was a British colony and housed Britain’s principal naval base in East Asia. The country was ruled by a governor and a legislative council mostly comprising wealthy Chinese businessmen, who were appointed rather than being elected.

Lee took it upon himself to challenge the hold of the businessmen in the legislative council. However, he soon adopted a more radical stance and parted ways from his allies. In 1954, he floated the People’s Action Party (PAP).

In 1956, Lee returned to London as a member of a Singaporean delegation that unsuccessfully sought self-rule for the colony.

Unrest in Singapore followed, during which a number of PAP leaders were imprisoned.

In the following year, negotiations in London resumed, again with Lee on the delegation. After an agreement was reached on a measure of self-government, Lee won a by-election in Singapore by an overwhelming majority.

The next year in London, Lee helped negotiate the status of a self-governing state within the Commonwealth for Singapore.

Elections were held under Singapore’s new constitution in May 1959, and Lee called for social reforms and eventual union with the erstwhile Federation of Malaya.

Lee’s party won a decisive victory, gaining 43 of the 51 seats, but Lee refused to form a government until the British freed the left-wing members of his party who had been imprisoned in 1956. After their release, Lee was sworn in as prime minister on June 5, 1959, and he formed a cabinet.

He introduced a five-year plan calling for slum clearance and the building of new public housing, the emancipation of women, the expansion of educational services, and industrialisation.

In 1962, Lee led Singapore into a merger with Malaysia, but three years later, Singapore left the union. Lee resigned as prime minister in 1990.

Lee recognised that Singapore needed a strong economy in order to survive as an independent country, and launched a programme to industrialise Singapore and transform it into a major exporter of finished goods. He encouraged foreign investment and secured agreements between labour unions and business management, thereby ensuring labour peace and a rising standard of living for workers.

Lee’s successor as prime minister, Goh Chok Tong, named Lee to the cabinet position of senior minister, from which he continued to exercise considerable influence. Upon Goh’s resignation as prime minister in 2004, he was succeeded by Lee’s son Lee Hsien Loong.

Lee's death signals an end of an era and leaves a huge void in Singaporean politics. - IANS