Search for the chirpy passerines we grew up with 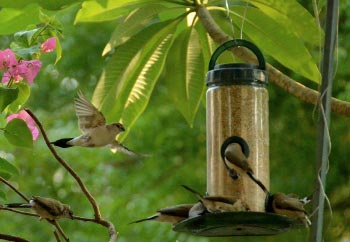 This nursery rhyme was part of one's lexicon during the formative years. Its main protagonist, the sparrow, was equally a delight to watch and hear early mornings. But today, as one marks the "World Sparrow Day" on March 20, one wonders where these little passerines have disappeared.

Some say radiation from the host of modern-day gadgets and their transmission infrastructure have taken a toll on them. Other say they are vanishing due to lack of habitat in the city and dearth of food -- mainly insects on which the little ones feed.

According to the World Wide Fund for Nature (WWF), house sparrows had evolved with humans instead of forests. Both had peacefully co-existed till not so long ago -- in houses and gardens. "But in the last two decades, their population is on the decline in almost every city," the fund said.

"As green spaces in our cities give way to more concrete constructions, the house sparrows loses its foraging ground, affecting the availability of seeds and worms," WWF said, prompting Nature Forever Society of India and the Eco-Sys Action Foundation of France to get them back home.

The fund also said with an increase in human population in cities, there also come other species -- such as domestic cat, which is a top predator of the house sparrow. Also on the rise are preying birds like kites and owls, which now pose a serious threat to the fragile sparrow habitat.

One research into dwindling population of sparrows prompted a 12-year-old girl in Mumbai, Mehek Mehta, entitled "The Sparrow Project: Decline of Sparrow Population in Urban Areas" won her the silver medal at the Homi Bhabha Bal Vaidyanic Competition held recently.

"I came across a newspaper article stating that radiation from mobile towers affected sparrows and other birds. I found this very shocking: If tiny birds like sparrows are affected by mobile towers, then what silent effects would it have on humans?" she queried

"This prompted me to select this topic for my research project," Mehta said. Her conclusion: The electro-magnetic waves emitted from mobile towers don't have any alarming effect on the habitat of sparrows and other birds.

She concluded her project by saying the diminishing sparrow population in Mumbai and other areas was a factor of environmental and ecological changes which are yet to be perceived by humans. But predominantly, it is the loss of food and nesting places that are the culprits.

This young girl was guided by experts in radiology Prof.Mahendra Karkare and her father Dr Mehool Mehta.

Since there was also a belief that mobile tower radiations interfere with the auditory mechanism of sparrows and disturb their habitat, Mehek specifically researched on the frequencies of such emissions and found the range was between 900 MHz and 1800 MHz.

She conducted her research by visits to more than 21 places, with and without mobile towers. She particularly found that the range of radiation far exceeded the upper limit of the hearing range of sparrows, which is 250 Hz to 18 Khz.

Mehta also found that house sparrows are usually found close to human habitation and cultivation and that the frequencies in mobile towers and handsets fall in the non-ionizing category and a sound beyond this range is ineffective in causing changes in the behavior of sparrows.

How do we bring the sparrows back?

"One of the most important things is: We need more nesting sights, more food for our sparrows," Mohammed Dilawar of Nature Forever Society told IANS. "We also need to adopt more nesting boxes and bird feeders." - IANS