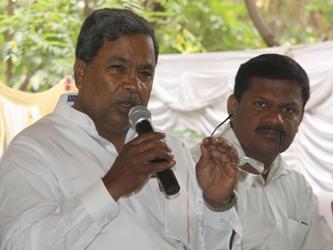 The Karnataka Police's Criminal Investigation Department (CID) will investigate the death of IAS officer D.K. Ravi who was found hanging in his apartment here, Chief Minister Siddaramaiah said on Tuesday.

Rejecting a demand by the opposition parties for a probe by the Central Bureau of Investigation (CBI) into the mysterious death, Siddaramaiah told lawmakers in the assembly that Ravi's death prime facie was a case of suicide due to personal reasons.

"We will, however, get the case investigated impartially by the state CID to unravel the mystery behind Ravi's untimely death," he said amidst uproar in the assembly.

An Indian Administrative Service (IAS) officer of the 2009 batch, Ravi was additional commissioner in the commercial tax department since December 2014 after his transfer in November 2014 as deputy commissioner of Kolar district, about 100 km from here, where he exposed illegal deals in sand mining and state-owned lands.

The body of the 36-year-old Ravi was found hanging from a ceiling fan in his apartment in Koramangala area by his wife Kusuma on Monday evening, when police opened the door after he did not respond to his wife or others' calls and did not go to office.

Rejecting the CID probe, Bharatiya Janata Party (BJP) and Janata Dal-Secular (JD-S) leaders said they would resort to an indefinite strike in the assembly premises till the Congress government hands over the case to the CBI.

As the opposition members refused to relent and allow the assembly proceedings, Speaker Kagodu Thimappa adjourned the house for the day.

"We are equally concerned over the sudden death of an upright and young IAS officer. We also want to know if it was a suicide or a murder or he (Ravi) died of some other reasons. People have the right to know the truth behind his death," Siddaramaiah reiterated, triggering protests from the opposition benches.

In an attempt to mollify the agitated opposition, Home Minister K.J. George said the preliminary report by the CID would be placed before the house in the next two weeks.

Opposition members also protested against George's statement that a preliminary probe by police gave some clues hinting at personal reasons for Ravi's suicide.

Meanwhile, hundreds of people bid a tearful farewell to Ravi, as his last rites were performed at his native village Doddakoppalu in Tumakuru district, about 80 km from here.

Ravi's body was taken in a cortege by road from the state-run Victoria Hospital in Bengaluru after an autopsy was conducted on Monday to ascertain the cause and time of death.

Thousands of people staged protests in Kolar and Tumakuru against the government and sought a CBI probe into Ravi's mysterious death. - IANS