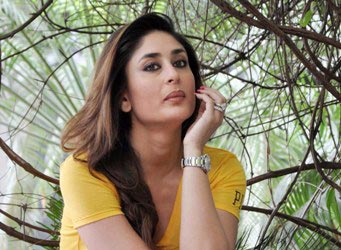 Bollywood's fit and fabulous Kareena Kapoor is on her way to turn 35, and she's clear about not attempting to be 22! She feels the key to aging gracefully lies in letting the "lines" be, especially when it comes to men.

"I think one should age gracefully. I am proud to be 34 and I think aging is wonderful. I hate it when I look at somebody and know that they have tried to cover the lines," Kareena told IANS in an interview on a recent visit to the capital.

Looking svelte in a golden shimmering gown, exuding a rare glow and charm, Kareena shared her thoughts about the prevalent nip-and-tuck trend to battle age-related troubles, when asked about it.

"I find men with lines on their faces more intelligent and sexy. Even for women, I think Maharani Gayatri Devi was very graceful. The way she aged with the grey hair -- that is elegance," added the wife of actor-producer Saif Ali Khan, who is 10 years her elder, and daughter-in-law of Bollywood's ageless beauty, Sharmila Tagore.

There's a notion that "Never ask a woman her age", but Kareena asks "What's wrong in saying your age".

"I don't want to be an 18-year-old or a 22-year-old girl. I am just done with that phase of my life. That is why I don't even try to be 22," added the actress, who was in Delhi to launch Magnum ice-cream.

"I'm 34 but I'm still endorsing an ice-cream, which people enjoy from an age of 6 to 60. That is an achievement in itself," she said.

When it comes to endorsements, Kareena has a long list that include brands like Lakme and BoroPlus. Her criteria is to choose a brand that reflects a little "bit of her personality".

"Each brand that you endorse reflects your personality. That's why I don't endorse meat, cigarettes and alcohol," added Kareena, who has cemented her space in Bollywood with movies like "Kabhi Khushi Kabhie Gham", "Jab We Met", "3 Idiots", "Omkara" and "Talaash".

On the film front, Kareena is set to pack her bags soon and leave for Amritsar to shoot for "Udta Punjab". She says the milieu of the film, based on drug busting in Punjab, will leave "everyone shocked".

"People are going to be really shocked. The film revolves around drug busting in Punjab, which is a big menace in that area. I am not allowed to divulge much information, but I play a pivotal role in the film," she said of the movie.

Kareena will also be seen in Salman Khan-starrer "Bajrangi Bhaijaan" this year. - IANS