Mufti to be Jammu and Kashmir CM as PDP, BJP reach agreement 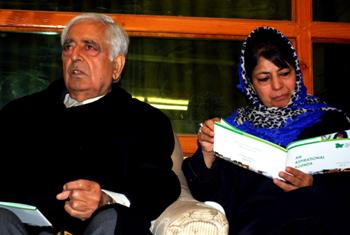 PDP patron Mufti Mohammad Sayeed will be the new chief minister of Jammu and Kashmir two months after the assembly elections, as his party and the BJP finally arrived at an agreement on forming an alliance government in the state.

Sources close to the Peoples Democratic Party (PDP) patron told IANS Saturday that an agreement had been reached on all contentious issues between the two parties.

"Yes, the main agreement has been reached on the draft of the Common Minimum Programme (CMP) on contentious issues like article 370, Armed Forces Special Powers Act (AFSPA) and the plight of West Pakistan refugees," a party source told IANS.

"It has been agreed that without any written reference to it, both the parties would respect the wishes of the people of the state in consonance with the Constitution of the country with regard to article 370," the source added.

The PDP has 28 legislators while the BJP has 25.

Sayeed returned to the winter capital Jammu Friday after spending a week in Mumbai.

As per the agreement, he will be the chief minister for the full six-year term.

A PDP insider, who is engaged with the BJP in the dialogue process on government formation on behalf of his party, said that instead of accepting the demand that the AFSPA should be revoked from the entire state within a year, it has now been agreed by the two parties that a committee would be formed which would recommend gradual, but timely, revocation of the Act from areas in the state.

Sources in the BJP said: "The PDP has agreed to the BJP demand that the CMP should accept that the problems faced by West Pakistan refugees should not be politicised, but treated as a humanitarian issue that needs to be addressed on humanitarian grounds."

Asked about media reports that government formation in the state was imminent because the PDP and the BJP had agreed on the draft of the CMP, party chief spokesman Naeem Akhtar told IANS: "I am meeting Mufti sahib today (Saturday) and if anything has been worked out, we will hold a briefing about it during the day."

Unlike his steady dismissal of any agreement with the BJP during the last nearly two months when he maintained the "structured dialogue between the BJP and the PDP had not even started", Akhtar sounded less circumspect Saturday about his lack of knowledge regarding an agreement on the CMP.

Since these people were not citizens of the erstwhile state of Jammu and Kashmir as it existed before accession to India in 1947, they cannot vote in the assembly elections nor buy property in the state.

As an anomaly, the West Pakistan refugees can vote in the parliament elections, but not in the state elections since the state has a constitution of its own in addition to India's Constitution and both apply concomitantly to the state.

With regard to the PDP demand on return of NHPC-owned hydro-electric power projects in the state to state ownership, the PDP sources said it had been agreed that the two parties would work together for central assistance for state ownership of these projects.

"The nuts-and-bolts job has been completed. All that now remains is an announcement on the agreement between the two which could be made within the next two-three days," a source said.

The sources also added that Sayeed would formally call on Prime Minister Narendra Modi after the PDP and the BJP announce having formalised the draft of the CMP.

In the 87-member state assembly, the National Conference has 15 members, the Congress 12 and there are seven independents. - IANS