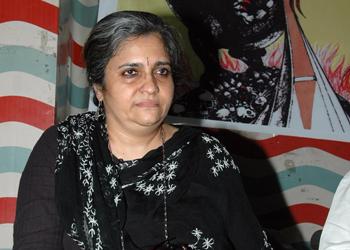 The Supreme Court Thursday restrained Gujarat Police from arresting activist Teesta Setalvad and her husband Javed Anand in connection with alleged misuse of funds collected by their NGO Sabrang for setting up a museum at the spot of one of the worst carnages during 2002 Gujarat riots.

Reserving its judgment, a bench of Justice Dipak Misra and Justice Adarsh Kumar Goel said: "As an interim measure, it is directed that the appellants (Teesta Setalvad and Javed Anand) shall not be arrested in connection with FIR being CR No.1 of 2014, registered with DCP, Crime Branch, Ahmedabad, Gujarat."

Reminding Jethmalani that liberty was too precious to be taken away so lightly, the court asked "whether the liberty be put on ventilator or put in Intensive Care Unit" because accounts are not in order or there is mismanagement of accounts.

"Could they be called for custodial interrogation on the grounds that money collected by NGO Sabrang was not spent for the purpose it was collected for," said the court.

The court meanwhile directed Setalvad and Anand to provide all the documents required by the Gujarat Police in respect of donors to the fund from within India and overseas.

Gujarat Police will provide the list of documents required by it from the social activist, who was directed her to cooperate with them in the interrogation, the court ordered.

The court also asked if Setalvad and her husband have taken money from the victims on whose complaint the state government was proceeding against them.

Saying that it was for the donors to indicate that "I have given (the contribution) for this purpose", the court said: "The gravity you are trying to accentuate should come only after they (donor) say that the funds (given by them) have been misused."

The court's observations came as Jethmalani sought to make out a case that both Setalvad and her husband have cheated the victims of the carnage at Ahmedabad's Gulbarga Society by collecting money by highlighting the pre and the post riots sufferings faced by them and not fulfilling the promises of setting up the museum and helping them financially.

Senior counsel Kapil Sibal, appearing for the couple, strongly contested Jethmalani's submission that Setalvad and Anand have misused the trust money for buying luxuries like clothes, wine and other things and challenged him to cite one instance where trust funds were misused for personal expenditure.

He said all that Jethmalani was alleging before the court was not there in the FIR against the couple.

Setalvad and her husband had moved the apex court challenging the Feb 12 Gujarat High Court verdict declining them anticipatory bail in the alleged misuse of funds case.

They have been accused of misappropriating around Rs.15 million collected through their NGO Sabrang Trust for setting up a museum at the Gulbarga Society in Ahmedabad, where 69 people were killed during the communal conflagration.

Setalvad and her husband have been fighting for the victims of the communal carnage which engulfed Gujarat following the Feb 27, 2002 Godhra train burning.

The complaint against Setalvad was filed by 12 residents of the society after the plans for the proposed museum were put in cold storage citing various issues. - IANS