Nothing wrong in AAP's foreign funding: Centre to HC 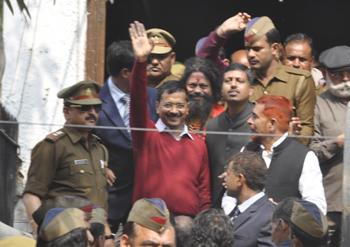 The central government Wednesday told the Delhi High Court that the Aam Aadmi Party's (AAP) foreign funds were investigated and nothing was found in violation of the law.

A division bench of Chief Justice G. Rohini and Justice R.S Endlaw also asked the ministry of home affairs to submit its revised or up-to-date report with regard to its findings in the matter, in a sealed cover by 4 p.m. Wednesday.

The bench reserved the order on the public interest litigation (PIL) that sought a CBI probe into foreign funds the AAP received in the past and now in violation of law.

The PIL was filed by advocate M.L. Sharma against AAP chief Arvind Kejriwal and others saying that AAP has been receiving foreign funds in violation of the Foreign Contribution Regulation Act (FCRA).

The counsel appearing for the Centre told the court that the earlier government had investigated the issue and filed a status report and nothing was found against AAP.

"The issue was investigated, there was nothing which was found out," he added.

Recently, AAP Volunteer Action Manch (AVAM), a group of volunteers who broke away from the AAP in August last year, accused the party of receiving Rs.2 crore in four equal instalments from companies registered in Delhi slums and having the same set of directors.

The group claimed that April 5, 2014, four bogus companies made donations of Rs.50 lakh each through cheques to AAP at midnight.

It alleged that the companies made these donations even though they have not earned profits for two years.

Sharma claimed that it has been revealed that lakhs of phone calls from Dubai and other countries have been made to Delhi, especially to the Muslim community for supporting AAP's election.

"The AAP now has been securing funds from foreign country, especially Muslim terrorist, in cash converting through false cheques as well as phone calls to Delhi from Dubai and other countries...," the plea said.

However, appearing for the AAP, advocate Pranav Sachdeva told the court that the issue of AVAM is being investigated by the government and it has cooperated on the issue.

AAP is the only party which asked the Supreme Court to set up a SIT on funding received by all national and regional political parties, he further said.

The bench after hearing all the parties reserved the order on the PIL and said: "Order reserved. We will pass the order."

The plea named Delhi Chief Minister Arvind Kejriwal, Deputy Chief Minister Manish Sisodia, advocates Shanti Bhushan and Prashant Bhushan and said AAP and its members were promoted and funded by the Central Intelligence Agency (CIA) of the US through various companies and trusts such as the Ford Foundation.

Earlier, the court had directed the central government to go through the details of the money donated to AAP since its inception Nov 26, 2012 and to take action if anything was found in violation of the FCRA. - IANS