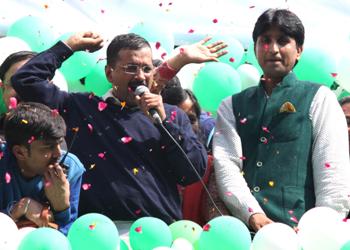 In one of the most stunning comebacks in Indian political history, the Aam Aadmi Party (AAP) of Arvind Kejriwal Tuesday scored a landslide win in Delhi, delivering to the BJP its first electoral defeat since its historic Lok Sabha triumph and reducing the Congress, that had ruled the capital for 15 years till 2013, to a virtual nonentity.

As thousands of AAP activists broke into celebrations all over the capital, election officials counting the votes polled Saturday said the party was tipped to end up with a staggering 65 of the 70 assembly seats -- the highest victory margin for any party in Delhi so far.

Prime Minister Narendra Modi, who had led an aggressive campaign against Kejriwal and had called him an "anarchist" and had even compared his ideology to that of Maoist extremists, congratulated the AAP leader as it became clear that the BJP was headed for a humiliating rout, winning at best just four seats. Modi promised the central government's full cooperation to the AAP government, which is expected to take oath at the Ramlila Maidan Sunday -- exactly a year after Kejriwal quit after ruling the capital for 49 tumultuous days.

An emotional Kejriwal, 46, who founded the AAP only in 2012, became teary eyed as his colleagues repeatedly hugged him and lifted him in the air at his house at Kaushambi in Ghazibad bordering Delhi. Outside, activists kept a steady chant of "Paanch Saal, Kejriwal!"

Kejriwal later reached the AAP office in central Delhi where he told thousands of boisterous supporters waving party flags and brooms -- the AAP election symbol -- that the AAP sweep was "a victory for truth and honesty".

There were traffic jams in many parts of Delhi as AAP supporters, a majority of them young people, celebrated on the streets.

The Congress suffered an unprecedented washout, with all its 70 candidates losing. Its chief ministerial aspirant, Ajay Maken, resigned as general secretary.

So massive was the AAP sweep that even BJP veterans, including some household names in Delhi, were on the losing track.

The party's chief ministerial candidate Kiran Bedi, who was personally picked by Modi and BJP president Amit Shah to lead the party's charge -- a move that created deep fissures within the party -- was struggling to win.

As expected, the AAP win created ripples across the country.

In remarks clearly aimed at Modi, West Bengal Chief Minister Mamata Banerjee, who had asked people in Delhi to vote for the AAP, said it was a "big defeat for the arrogant"

"This is a victory for the people and a big defeat for the arrogant and those who are doing political vendetta and spreading hate... The election is a turning point... The country needed this change."

Gandhian Anna Hazare added: "The result is a defeat for Narendra Modi. What did the BJP do in the past nine months? The BJP made promises to tackle corruption. Instead they took anti-people, anti-farmer decisions. They lost public confidence."

Hazare, who mentored Kejriwal when he launched an anti-corruption campaign here in 2011 that shook India, urged the AAP leader not to repeat the mistakes he committed during his earlier stunt as chief minister.

In Kerala, former chief minister V.S. Achuthanandan called the vote for AAP a blow to "Modi's arrogance". Former Bihar chief minister and JD-U leader Nitish Kumar echoed him. The CPI-M hailed the people of Delhi for "decisively rejecting the BJP".

One after another, BJP leaders accepted defeat and congratulated the AAP and Kejriwal. "As the party's Delhi leader, I accept moral responsibility for the defeat," said Satish Upadhyay. "Clearly, we made a mistake in understanding the people's mood."

Election officials said the AAP was poised to grab as many as 65 of the 70 seats, leaving just four to the BJP. Even lesser known AAP activists won easily. AAP leaders who had joined the BJP just before the polls were also routed. The Indian National Lok Dal (INLD) was set to win one seat.

"Kejriwal is teary eyed," AAP leader Pankaj Gupta told IANS. "None of us could sleep properly last night because we were tense. Now, we just cannot believe these unbelievable results."

The AAP is set to bag an incredible 54 percent of all votes, officials said. The AAP swept all across the capital, including both in the middle class areas and low income neighbourhoods.

Kejriwal hiself was headed for victory in New Delhi constituency, where he created history in 2013 by defeating three-time chief minister Sheila Dikshit.

Senior AAP leaders, including Somnath Bharti, Manish Sisodia and Rakhi Birla, who were ministers in the earlier Kejriwal government, were also poised to win.