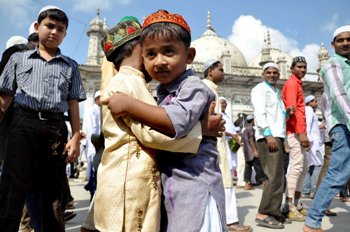 Religious communities of the picturesque village of Burondi in Ratnagiri district have inked a pact to protect 'communal harmony' for the next 100 years in Maharashtra, representatives said here Monday.

The pact was formally signed last month by leaders of the local Hindu and Muslim community along with witnesses, duly notarized, and copies were provided to all stakeholders, in the presence of a large number of villagers.

Village head Pradip Rane, 44, said the main objective of the agreement, considered the first of its kind in the country, between the two main communities was to create awareness and importance of communal harmony, especially among the next generation.

"The younger generation of both the communities does not understand the meaning of amity, brotherhood and communal unity which is essential for progress and prosperity of everyone. We have taken the first steps through this agreement," Rane told IANS.

Concurring, Ashraf Mastan, 43, a fisherman and Muslim leader who has signed on behalf of his community, said the villagers have progressed a lot on the communal amity front in the past 25 years.

"There was a time when we had to virtually struggle to get permission for our religious functions ... See the changed scenario when the two communities have agreed to work for each other and jointly progress," Mastan told IANS.

Both the leaders pointed out that the common masses have been living peacefully together since centuries, but certain forces attempt to create a divide among them for their sinister designs.

Burondi has a total population of around 10,000, with nearly 3,500 Muslims spread mainly across three large 'mohallas'.

"When we can buy and eat the fish caught by the Muslim fisherfolk, and they eat the fruits and vegetables the Hindu farmers grow, then why can't we all live together peacefully," Rane asked.

Accordingly, a community coordination committee was formed to hammer out the issues of differences between the two communities and a detailed three-page consensual agreement was reached.

Rane pointed out that the two communities have been living peacefully since 1987, when the small village - around 215 km south of Mumbai - was disturbed by a communal skirmish.

"Now, we have decided to help celebrate each other's festivals and join the celebrations, ensure that revellers from both the communities do not disturb the other during such celebrations, counsel and advice the youngsters on the importance of communal unity and peace," Rane said.

Some of the highlights of the agreement include a code of conduct for Hindu processions will pass and play music only when 'namaaz' is not being offered at the three roadside mosques.

Similarly, the annual Govinda processions during 'Janmashthami' will pass through the Muslim areas and even pay obeisance at mosques, Hindus would help the Muslims during the annual 'urs' (feast) at Karajgaon mausoleum here, Muslims would not object to the festivities which will not disturb their religious practices in any manner.

The members of both communities will wholeheartedly join in organising and celebrating each other's festivals unitedly and create an overall festive atmosphere in the village.

Besides, in major public programmes conduct by the village, members of both communities would be seated on the dais and the audiences, while seniors from both sides would be felicitated and honoured publicly. - IANS