AAP most likely to win in Delhi, say exit polls 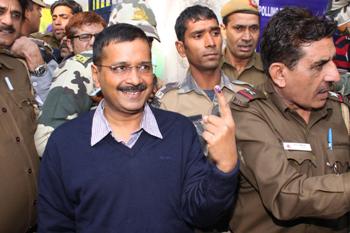 The AAP is most likely to win the Delhi assembly elections with a seat share ranging from 31 to a staggering 53 seats, exit polls said at the end of voting Saturday.

Any party will need at least 36 seats to form a government in Delhi.

The NDTV survey said the AAP could win 38 seats and the BJP 29.

The Axis-APM poll, however, credited 53 seats to the AAP and 17 to the BJP.

All five exit polls put the Congress at a distant third, giving the party zero to a maximum of four seats.

Today's Chanakya exit poll did not give the party break up but said in terms of who would be the best chief minister, Kejriwal scored a high mark of 53 percent.

The AAP and the BJP were widely seen as the principal contenders for power in Delhi. - IANS