Costumes out of condoms -- design students get innovative 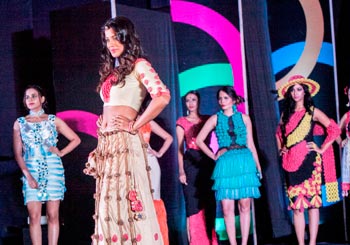 Imagine dresses, skirts and hats made out of colourful condoms -- that's a design innovation brought to reality by fashion designing students at a unique contest here.

The event, held Thursday, was intended to break the taboos regarding condoms.

"The main idea behind associating with the students to conduct an event of this caliber is to make condoms a fashion statement. In a country like India in which the society still shies away from talking about condoms in the open, our intention is to rationalise the stigma around condoms by generating interest around it just like any other consumer product," Vishal Vyas, general manager, marketing, Skore Condoms, said in a statement.

Pearl Academy and WLCI were some of the institutes that took part in the event, which saw actress Mugdha Godse as the celebrity showstopper.

The contest included submission of sketches, screening of designs and more.

A.D.Singh, designer, chief advisor and judge; and Amy Billimoria, fashion designer and judge of the event announced Elsa Nillaj of International Institute of Fashion Design, Andheri as winner of the Skore Fashionista. Sneha Bhandari and Nusrat Sayed of Rachna Sansad College, Dadar were runners-up in the competition.

Models sashayed down the ramp in short skirts, dresses, evening gowns and crop tops at the event.