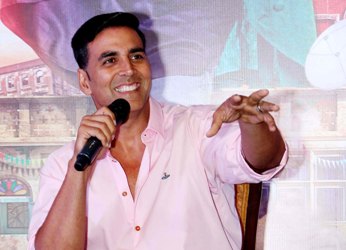 Actor Akshay Kumar, who is leading Indian celebrity online support for global Action/2015, says the campaign is all about taking action to end poverty and inequality, and providing equal opportunities for all.

India’s leading global ambassadors comprising A-list actors, actresses, directors, award-winning authors, dignitaries and public figures came together in a show of unity Jan 15 to show their support via Twitter and Facebook for the launch of the Action/2015 campaign.

The campaign, a global outreach initiative to address world-changing issues of climate change, poverty and inequality, saw an outpouring of solidarity from celebrities such as Akshay, who was the first person to tweet his support for the campaign, reaching out to social media users.

“Action/2015 is not about impossible stunts, it's about taking a plan and turning it into a reality, taking action by ending poverty, inequality and providing equal opportunities for every single person on this planet to secure a better future for all of us today and for our future generation.

“Between the wealth on this planet and all the overpaid millionaires, if enough of us stand together and give what we can, we literally can end the pain and suffering in this world. That's the kind of statistics I think people need to understand -- this isn't impossible, this is 100 percent doable,” Akshay told IANS.

He is sure the "world can change".

"Let's not complain and turn a blind eye anymore. Dig and then dig harder, do it for the hungry, the homeless, the dying, do it for the greater good.

"The power is in our hands and if we all come together this year, we could eradicate extreme poverty within an entire generation. 2015 will be a historic year, or it could be just like the last. Take Action/2015, make this ultimate dream today's encouraging reality,” he added.

The Action/2015 campaign is a growing movement of more than a thousand organisations in over 120 countries.

The campaign was announced by Pakistan's education activist Malala Yousufzai when she accepted the Nobel Peace Prize.