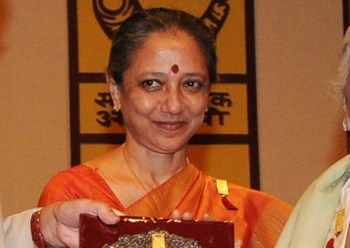 Censor board chief Leela Samson has resigned protesting alleged interference by the government. But she denied Friday that her exit was linked to controversial film "MSG".

"It is absolutely true that I have resigned. (I resigned) last night by SMS and today by email and hard copy letter," Samson told IANS on SMS.

Samson has headed the Central Board of Film Certification (CBFC), a statutory body under the information and broadcasting ministry, since 2011. It regulates the public exhibition of films under the Cinematograph Act, 1952.

An acclaimed Bharatnatyam dancer, Samson said her resignation followed interference by the government in the censor board's working and what she described as coercion and corruption of panel members.

But she denied speculation that her departure was due to the clearance given by the Film Certification Appellate Tribunal (FCAT) to Dera Saccha Sauda chief Gurmeet Ram Rahim Singh's film "MSG - The Messenger of God".

When IANS asked Samson if "MSG" was the factor, she said: "That is not the reason."

Minister of State for Information and Broadcasting Rajyavardhan Singh Rathore said Samson's resignation was her personal decision and there was no coercion by the government.

"Whatever the decision, it has to be acceptable to all," he said, in an obvious reference to the FCAT's green signal for "MSG". "There was no coercion by the government. If she feels so, let her convey it to the government."

"MSG" was reportedly first rejected by the examining committee of the censor board and referred to the revising committee.

When it too decided against clearing the film, it was referred to FCAT, which cleared it for release after asking producers to mute a word or two, according to an informed source.

The film did not hit the screens as scheduled Friday. A spokesperson for the movie told IANS that it was ready for release in a week.

"MSG" features Ram Rahim in the lead role. According to his sect, the movie has seven songs and will be released simultaneously in Hindi, Tamil, Telugu, Malayalam and English.

Ram Rahim has composed the music and sung the seven tracks.

Samson said in an earlier statement: "Interference, coercion and corruption of panel members and officers of the organisation appointed by the ministry and having to manage an organisation whose Board has not met for over nine months as the ministry had 'no funds' to permit the meeting of members."

"The term of all members and the chairperson is over. But since the new government failed to appoint a new board and chairperson, a few were given extensions and asked to carry on till this procedure was completed."

"However, recent cases of interference in the working of the CBFC by the ministry, through an 'additional charge' CEO and corrupt panel members has caused a degradation of those values the members of this Board of CBFC and chairperson stood for," Samson added. - IANS

Punjab stares at power crisis with coal supplies running out