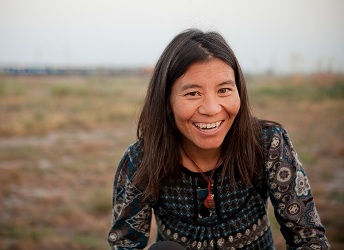 Thinlas Chorol, a social entrepreneur from Ladakh, has been chosen as The Weekend Leader – VIT Person of the Year 2014.

“Thinlas is from the chilly heights of Ladakh, a region and terrain the rest of India is not familiar with. If her contribution is towards developing tourism in Ladakh, it should be appreciated and acknowledged. For it is such people who can build a bridge between the region and the rest of India,” said Babu Jayakumar, a member of the selection panel.

As a woman her chances of becoming a trekking guide in Ladakh was not too bright. But Thinlas was undeterred when travel agencies refused to employ her as a guide and started working as a freelancer, taking tourists to monasteries and other cultural sites.

She did a mountaineering course from the Institute of Mountaineering, Uttarkashi, and also studied at National Outdoor Leadership School at Ranikhet, Uttarakhand, where she learned about first aid, rafting, leadership and backpacking.

After setting up ‘Ladakhi Women’s Travel Company’ in 2009, there was no looking back, and her company that promotes ecotourism and home stays, currently employs around 21 women, who work as trekking guides, porters and office staff.

The Weekend Leader – VIT Person of the Year Award includes cash prize of Rs.25, 000, a trophy and a citation. The Award will be presented at a function to be held in VIT, Vellore in March 2015. – TWL Bureau