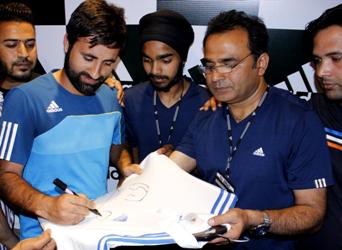 Brimming with confidence after worsting formidable Mumbai in the premier Ranji tournament, Jammu and Kashmir's cricket team that, in many ways, is representative of India's pluralism, is confident of doing even better with proper infrastructure and financial support.

The kudos have not stopped even a month after the Jammu and Kashmir team stunned 40-times champions Mumbai with a four-wicket win - and that too at the latter's Wankhede Stadium.

When Mumbai began chasing a target of 237 runs on the last day of the match, few thought the Kashmiris boys had even an outside chance. But such was the deadly bowling that Mumbai simply collapsed.

"Will you believe me if I say that our team has a battery of pace bowlers who can compete with the best anywhere," Ashender Koul, chairman of the state's Ranji Trophy selection committee and a former captain, told IANS.

Himself a left arm spinner, he went on: "I have no reservations in saying that our fast bowlers are better than what we have in the national team at present."

If you think Koul is exaggerating, don't blame him. The performance of the Jammu and Kashmir cricket team in the Ranji Trophy stunned everyone because the dazzling performance came after Kashmir faced the worst floods in its living memory.

Koul agreed: "The performance of our team is something you would not have expected especially after the devastation suffered by the state during the recent floods."

And the state's cricket association was also hit by shortage of funds ever since the Board of Control for Cricket in India stopped funding it.

The win over Mumbai was Jammu and Kashmir's first victory over Mumbai, the cricket giants, in the tournament's 79-year history.

Like the state itself, the team is a good mix of Muslims, Hindus and Sikhs.

Against Mumbai, opener Shubham Khajuria, who was named Man of the Match, scored a composed 78 and there was an unbeaten 41 from Hardeep Singh. Captain Parvez Rasool contributed a valuable 32.

Muhammad Ashraf Bhat, 62, who played for the state as a spin bowler and later was the coach and selector for over a decade, is more than happy the way the Kashmiri boys brought glory to the troubled state.

Bhat told IANS: "We have some star performers like Parvez Rasool. Then there are I.N. Dev Chauhan, Ram Dayal, Shibum Khajuria and Omar Nazir. All these together form a well oiled machine.

"In the victory against Mumbai, Ram Dayal took eight wickets while Shibum Khajuria hit a ton."

It is Indian Test player Sunil Joshi who is coaching the Jammu and Kashmir Ranji team, slipping in the shoes of the legendary Bishen Singh Bedi who laid the foundations of the present team and in many ways made them what they are.

"Himself a left arm spinner, Joshi has been doing a good job giving the right frame of mind to our boys which is vital in keeping your cool while focusing on victory in cricket," Bhat said.

While Parvez is an all rounder, Dev and Shibum are batsmen. Interestingly, Ram Dayal, who scored a century against Gujarat, joined the team as a pace bowler and has now graduated into another all rounder.

The match against Gujarat ended in a draw although Jammu and Kashmir had a first innings lead. Kashmir also drew against Uttar Pradesh.

It is not only the absence of good infrastructure and funds but also the extended Kashmir winter that puts sports in the reverse gear in Jammu and Kashmir.

"For over five months you cannot play in the Kashmir Valley," said player Koul.

"We need funds to move our boys out to the best places in the country. Unless that happens, cricket won't touch its real glory in Kashmir," added Koul. - IANS