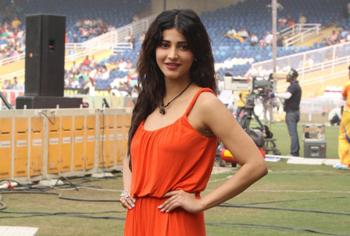 The New Year is going to be extremely busy for actress Shruti Haasan, who is gearing up for the release of six films - four in Bollywood and one each in Tamil and Telugu.

In Bollywood, Shruti has "Gabbar" opposite Akshay Kumar, "Rocky Handsome" and "Welcome Back" opposite John Abraham and "Yaara" opposite Vidyut Jammwal.

Down south, she has a yet-untitled Tamil and Telugu project each with Vijay and Mahesh Babu, respectively.

"She's been working tirelessly, round the clock juggling between her film and brand commitments, while also making time for her music. Shruti has got a very interesting line up that spans various genres and ensures different looks and character graphs," a source close to Shruti told IANS.

Recently, she was signed on for yet-untitled Tamil-Telugu bilingual featuring actor Akkineni Nagarjuna and Karthi. - IANS