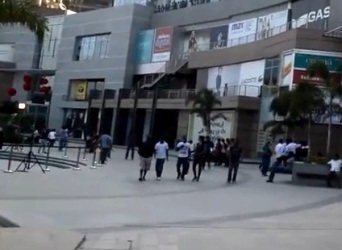 It's still a small component of India's Rs.38 trillion ($600 billion) overall retail trade industry. Yet, the e-commerce format with sales of Rs.1 trillion ($16 billion) managed to create a buzz in 2014 like never before - not just with mega promotions but also with mergers, acquisitions and some crazy valuations.

Earlier in December, the Anil Ambani-led Reliance Group sold its 16-percent stake in Yatra.com, a leading leading consolidator of travel products, for an eye-popping 12-fold jump in initial investment made in 2006, to value the portal at $500 million.

This was followed by a $700 million fund-raiser by Flipkart, that came over and above the $1 billion the company had raised in July - that had taken its valuation to a whopping $6 billion overnight. Flipkart also decided to merge Myntra, another leading e-retail firm, into it.

Similarly, one saw Japan's SoftBank make a commitment in October to invest $627 million in SnapDeal, a major player again in the Indian e-commerce space, and pick a $210-million stake in Ola that offers car rentals in 19 Indian cities through its mobile platform, web site and call centres.

Not to be outdone, the US-based Amazon said it will invest $2 billion in India's e-retail space.

"It was a roller coaster journey," Ashvin Vellody, partner for management consulting with KPMG in India, said in reference to the year that was for the country's e-commerce space.

"I think we have seen a lot of twists and turns in the industry in 2014 and more will follow in 2015. The good thing that emerged from this was that the customer is winning. There is pressure from every side and the customer is benefiting from that," Vellody told IANS.

Data on Internet penetration in India backs the scales of operation.

There are currently some 250 million Internet users in the country. As per various estimates, the e-commerce industry, now valued at $16 billion, is growing at 30-40 percent each year and will top $100 billion in the next five years.

To serve them, there are some one million online retailers -- small and large -- which sell their products through various e-commerce portals, according to a report by the commerce ministry-promoted India Brand Equity Foundation (IBEF).

The year, however, did not pass without some hiccups.

Flipkart had to face much embarrassment when its "Big Billion Day" Oct 6, meant to attract online shoppers with steep discounts, crazy deals and lucky draws on a range of products, boomeranged as its website crashed and social media was abuzz with allegations of cheating against the company.

Flipkart apologised to the people for the inconvenience. But it also announced that it had got a billion hits and sold products worth $100 million (Rs.600 crore) that day including some 500,000 mobile phone handsets, an equal number of clothes and some 25,000 TV sets within minutes of starting sales at 8 a.m.

This set the regular retailers thinking and fuming as well.

The Confederation of All India Traders, an umbrella body for regular retail trade industry, cried foul and urged the commerce ministry to regulate the e-retail business, look into their trade practices, which they alleged were not exactly as per rules, and create a level-playing field.

But some leading industry chambers cautioned against over-regulation and the matter died down.

"There is the need to professionalise. A profitable model is also yet to evolve. Operationally everyone is challenged. The supply chain hasn't grown the way demand has. There's no business model yet," Saurabh Srivastava, director with PricewaterhouseCoopers (PwC), told IANS.

Besides logging a 40-45 percent annual growth, they feel huge investments will flow into logistics to overcome the challenges of last-mile reach. They also expect large retail chains of Reliance Industries and the Aditya Vikram Birla Group, among others, to go online.

"The coming year will be more dynamic. A lot of niche e-commerce players will emerge. We expect to see a good number of traditional businesses also leveraging this channel in both the B2B and B-2-C space," Vellody said.

Experts also predict some initial public offerings in the near term not just because existing investors will seek to realise value but also since the e-retail industry will need funds for infrastructure, logistics and warehousing -- estimated at $500 million now and 1.9 trillion by 2017.

"The e-commerce industry is in a growth stage. A lot is expected in the coming days," Nasir Jamal, secretary general of the e-Commerce Association of India, told IANS.

"We will see more consolidations. Public issues will also happen. The industry is keenly awaiting the GST (goods and service tax) to get cleared. It will help in seamless movement of goods among states. It will give the e-commerce industry wider operations and a major push."

Highlights of e-commerce industry in 2014:

* Flipkart gets $1.7 billion in funding, taking valuation to $7 billion