Modi most searched personality on Google 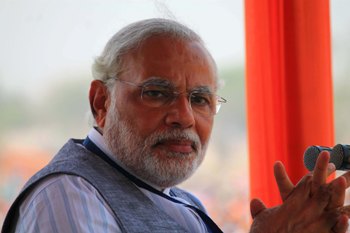 "Modi is one of the top most searched personalities this year, even ahead of Bollywood stars Salman Khan and Katrina Kaif, making him the first politician to gain more popularity than film celebrities on the web," Google India said in a statement here.

The company's "Year in Search" lists this year's (2014) major events, biggest interests and most searches on its global web site.

"The historic Lok Sabha elections in April-May emerged as the country's first digital election, revealing that an online presence mattered for all political parties while 'Elections 2014' topped our trending charts," the statement said.

"Our findings are a testimony of India's growing interest in issues of national importance. The Lok Sabha elections pointed to the power of digital media and the unprecedented demand for information," Google India managing director Rajan Anandan said in the statement.

Google also witnessed an exponential increase in the number of internet searches not only on desktops, but also smart-phones, a trend that is reflective of the country's growing digital emergence as the next billion Indians embrace the power of the web.

Among celebrities, Bollywood actress Sunny Leone was the most searched personality, ahead of favourites like Salman, Katrina and Deepika Padukone.

"Cricket is second to Bollywood in trending searches and Kohli was on the top of charts, ahead of Tendulkar, whose popularity endures even after his retirement," the statement said.

A rise in smart-phone sales and a growing demand for internet access on handheld devices has seen a huge spike in internet search on mobile this year.