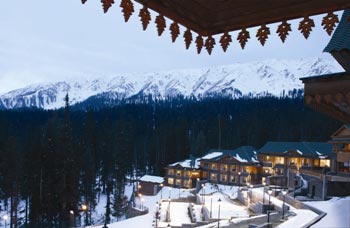 When a five-star luxury hotel threw open its doors to guests in this north Kashmir tourist destination in December 2012, many said Gulmarg did not have the inflow to sustain a high-end luxury facility like the Khyber Himalayan Resort.

Two years into the business and the resort has pleasantly surprised everybody. Khyber resort has been bagging national and international awards like no other hotel or resort has in the past in Kashmir.

Readers of the esteemed Conde Nast Traveller India voted The Khyber as their Favourite Boutique Hotel-India, for 2014, while the previous year they had voted the hotel as a first runner up.

At the Outlook Traveller Awards, it was conferred with a Special Jury Award - Indian Hotel Debut of the Year which was followed by the Best Boutique Hotel in India by Travel + Leisure India & South Asia at its India's Best Awards 2013. It has also featured in the Condé Nast Traveller India 2013 Hot List.

The resort has also been included as one of Asia-Pacific's best new hotels and resorts for 2013 in the Destination Asian Luxe List 2013.

Established in 2006, WLHA are positioned as the pinnacle of achievement for luxury hotels worldwide. The criteria to be successfully nominated and included in the voting process is overall excellence in service.

"Over 1,000 hotels from 145 countries were nominated for the 2014 award. Winners were judged on service delivery and effective management and voted for by international tour operators, travel agents and hotel guests," Umar Tramboo, MD, Pinnacle Resorts Pvt. Ltd, promoter of The Khyber Himalayan Resort & Spa, told IANS.

"We are truly delighted to have received this global recognition. It is testimony to the hard work of our team, which ensures that each guest has a superlative experience at a par with any international resort. Added to this is the location, right next to the ski lift, and the heady action offered by the ski slopes of Gulmarg," Tramboo added.

Khyber Resort is situated at an elevation of 8,825 ft. in the Pir Panjal range of the Himalayas.

It is spread over seven acres amid a grove of tall pine trees.

The resort offers a majestic view of the snow-clad Afarwat Peaks that glisten with a mesmerizing crimson of the setting sun on a clear day in Gulmarg.

The resort also houses Khyber Spa by L'OCCITANE that offers luxurious and holistic spa treatments inspired by the rituals of Provence, France. The wellness centre includes a gym, separate steam and sauna rooms for men and women and a heated indoor swimming pool.

"Our awe-inspiring location, combined with the unfolding drama of Gulmarg's changing seasons, has been tempting guests to return again and again. The resort is an easy walk from the Gulmarg Gondola, the highest ski lift in the World", Trumboo said.

The fact that this high-end luxury resort is doing good business with most of its rooms being booked in advance proves one just cannot have enough of Kashmir while Gulmarg remains the country's most sought after ski resort and tourist destination. - IANS