Life has been a fairytale: Ritu Beri on 25 years in fashion 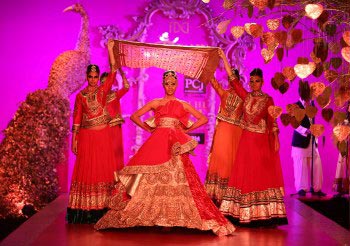 Ritu Beri, often called India's 'Fashion Queen', has completed 25 years in the fashion industry. The designer says her life has been a "fairytale" and beyond her dreams and now she is keen to write "inspirational books".

The designer, who was among the first Indians to storm the catwalks of Paris more than two decades ago, was recently bestowed the 'Order of Civil Merit', a civilian award by the Spanish government, at the Embassy of Spain in the capital.

Ritu, whose designs have been worn by celebrities like former US president Bill Clinton, Hollywood stars Nicole Kidman and Andie McDowell, India's Madhuri Dixit and Preity Zinta and Prince Charles among others, said that such awards were beyond her dreams.

"It is a great honour for me to get honoured by the country (Spain) that has always been an inspiration to me. This is certainly life's full circle moment," Ritu told IANS in the email interview.

Spain has always been her muse in most of her collections, even in her very first collection titled "Blessings of Buddha".

Ritu, who is a National Institute of Fashion Technology (NIFT) alumnus, was conferred with the Chevalier dans l'Ordre des Arts et des Lettres (Knight of the Order of Arts and Letters), one of the highest civilian awards by the French government, in 2010.

"I am so overwhelmed that I could never imagine I would feel like what I'm feeling today," said the designer who is married to Bobby Chadha. The couple has a daughter.

"My life has actually been a fairytale, I have always had crazy dreams. I'm a huge dreamer. But these particular awards were beyond my dreams. I never dreamt this could be ever possible. But it's a great honour and responsibility, which I have been conferred with."

Ritu has designed for many celebrities, but she has no favourites.

"Each client is important and I treat them all equally special," she told IANS.

Ritu, the first Asian to head French fashion house Jean Louis Scherrer, says she has "been lucky to experience the world of fashion in India and abroad".

She completed 25 years in the fashion industry in December.

"Today I have come a full circle and know what I should do and more importantly what not to do. The past 25 years I have chased my dreams and worked on ambitious projects," she said.

Often called "Donatella Versace of India" and the "First Lady of fashion" in the country, Ritu has also designed for the Barbie doll, and has been a consultant for London's Harrods store, as well as various international brands like Volvo, Swarovski and Honda Motors.

Even after spending over two decades in the industry, Ritu says: "I still love my work and enjoy fashion immensely."

Asked about her upcoming projects, she said: "I enjoy most doing challenging projects that are out of the box.

"I am negotiating tie-ups with certain international brands and hopefully interesting stuff will happen soon."

She adds she likes to "explore impossibilities and work in an inspired mode" only to satisfy herself and her passion.

Ritu said she also dreams of writing "many inspirational books".

"More than anything else, I am deeply involved in charity for children, the Blessed Heart Foundation that works to improve and uplift the condition of less fortunate children," she said. - IANS