Sehwag to auction his sweater for underprivileged 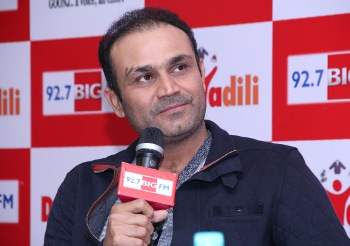 Ace cricketer Virender Sehwag will donate blankets and auction his sweater as part of his association with 'Daryadili', an endeavour to support the underprivileged battling cold weather in the country.

Sehwag has joined hands with radio station 92.7 BIG FM and NGO Goonj for the fourth edition of 'Daryadili'.

The cricketer, who was recently left out of the 30-member squad of probables for the 2015 One-Day International World Cup, is happy to "utilise" his time for a good cause.

"We look after people in our own house, but not those who are on the road... So, I thought I should get involved in such an initiative," he said.

"On behalf of my Sehwag International School, we will give at least 100 blankets and do as much as we can," said Sehwag, who also handed over blankets to a few underprivileged people at the media conference here.

He also promised to give away one of his sweaters for auction.

"The auction is not for money. The one who gives maximum number of clothes will get the sweater," he said.

He will also create awareness by featuring in one of the shows of the radio station.

Talking about the initiative, Anshu Gupta, founder director of Goonj, said: "People die because of natural disasters like earthquake and flood, but through this campaign, we want to tell the masses that people also die because they don't have clothes to wear during the winter season.

"If all of us give even a little bit, such deaths can be prevented to some extent."

He wants more people to contribute to the cause, but also shared that torn or oversized clothes won’t be considered.

BIG FM has provided a viable platform for people who wish to help the needy.

"We're carrying out the campaign in north India and down south. We understand that woollen clothes are not required there (south India). So, we are going to help them by giving stationery, toys and more,” Manisha Tripathi, national product head, 92.7 BIG FM, told IANS. - IANS