Rapist minor changes for the better 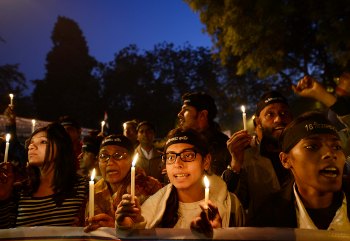 A minor, who was among the five people convicted for brutally raping a young woman in a bus in Delhi Dec 16, 2012, has "changed" and now shows interest in "cooking and painting", according to officials who interact with the now 19-year-old on a daily basis.

The teenager, who is serving a three-year term in a special reform home following an order by a juvenile court for his involvement in the gang rape, has also not shown any violent trait in the past two years.

"A month after the minor shifted to the reformation home, he was rude. But since then, there has been a change in him. He has not shown any violent trait since," a welfare officer at the Delhi government-run reformatory home told IANS on condition of anonymity.

"The reason behind his changed behaviour could be the repeated counselling he is getting. In the beginning, he never talked or discussed his feelings with anyone. But, after three-four months, when he was shifted from a separate room to a common room, he started talking with the other inmates," the officer said.

The juvenile was lodged in the reformatory home in north Delhi's Majnu Ka Tilla Dec 22, 2012, a day after he was detained from east Delhi's Anand Vihar bus depot while he was trying to flee.

A Juvenile Justice Board court Sep 1, 2013 sent him to three years in the reform home. Three years is the maximum punishment a minor gets for committing a heinous crime.

Another welfare officer told IANS that the minor helps the reformation home staff in cooking.

The officer said the youth, a native of Badaun in Uttar Pradesh, also shows keen interest in painting.

"He always draws two kinds of paintings. In one, he paints trees, flowers, animals and birds and in the other, he draws faces. The faces in his paintings never have any expressions," the officer said.

One of his paintings was selected in the list of top 10 best paintings in an exhibition organised Aug 14 at Nirmal Chhaya, an observation home for juvenile girls in Delhi.

A panel of judges, who deal with juvenile cases, and NGOs admired his painting, the officer told IANS.

The juvenile, who had come to Delhi eight years ago, did odd jobs before he was apprehended for the gang rape.

On Dec 16, 2012, he had gone to meet the main accused, Ram Singh, to return the money he owed him. The minor had taken along a bottle of wine to celebrate.

After consuming the liquor in the bus with Ram Singh and four others, they went on a joy ride. It was at this time that they picked up the 23-year-old trainee physiotherapist and her male friend.

The six people brutally gang-raped and assaulted the woman and dumped her and her male friend on the road -- bloodied and without clothes after nearly an-hour-long ordeal. The woman died 13 days later due to the grievous injuries.

As Indian laws consider someone less than 18 years as minor, he was tried by a juvenile court.

"Three months after he came here, he was shifted with three other inmates. Initially, he was lodged separately," said another officer.

The reformatory home has three types of accommodation for inmates, including a separate one for those convicted of heinous crimes. He along with other inmates is also taught everyday from 12.30 p.m. to 2 p.m. but officials said he has not shown any interest in studies.

"He can now sign his name both in Hindi and English, but he is weak in mathematics," said the officer. - IANS