Oldest serving CM Badal goes to school on his birthday 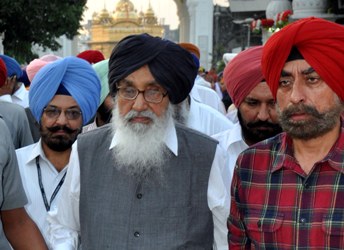 At 87, he is the oldest serving chief minister in the country. But even at this age, the 'young-at-heart' Punjab Chief Minister Parkash Singh Badal chose to celebrate his birthday with school students Monday.

Birthday boy Badal, a man from a farming background, who is well known for his witty one-liners, had cut nearly a dozen cakes by the end of the day.

The birthday events for the octogenarian chief minister were held at his native village Badal and Gidderbaha town, both in Muktsar district of Punjab.

Starting his day early with Akali Dal leaders and villagers meeting and greeting him at his ancestral house in Badal village, he remained busy throughout the day with functions to mark the occasion.

His son and Punjab Deputy Chief Minister Sukhbir Singh Badal and daughter-in-law Harsimrat Badal, who is the union minister for food processing, were not with him as they were in Delhi Monday.

In Gidderbaha, the chief minister went to the residence of Akali Dal leaders Gogi Jain and Vijay Jain where he cut a cake and celebrated his birthday.

His next stop was at the Malwa Public School, Gidderbaha where enthused students and the school authorities had organised a special programme to celebrate his birthday.

"I want to tell you that you should work hard and sincerely to achieve success in life," Badal told the students, who got themselves clicked with him.

Later, he inaugurated the national school games' events at the Mata Jaswant Kaur Memorial School in Badal village. He cut a cake here too and distributed it among students.

Born on Dec 8, 1927, at Abul Khurana village near Malout, Punjab in an agriculturist family, he has been the Punjab chief minister five times.

He entered politics in 1947, the year when India got its Independence from British rule, by being elected the Sarpanch (headman) of his village panchayat (council). He was first elected to the Punjab assembly in 1957 on a Congress ticket. After leaving the Congress, he ended up opposing Congress policies and governments.

He was briefly a union minister in 1977 in the Morarji Desai government.

His wife Surinder Kaur died in 2011 due to cancer. The couple had two children, son Sukhbir Singh Badal and daughter Preneet. - IANS