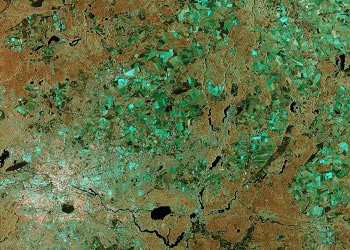 For the first time, an image taken by a satellite has been sent to Earth using a laser beam, paving the way for instant streaming of satellite images to Earth.

The image of Berlin taken by the Sentinel-1A satellite, was beamed to another satellite called Alphasat almost 36,000 km away and then beamed back to earth over the same distance.

"You can visualise today's link as an optical fibre in the sky that can connect the Sentinels back home to Europe, from wherever they are on their orbit around Earth," said Magali Vaissiere from the European Space Agency.

This link between the two kinds of satellites means that in future, information can be streamed to Earth, almost instantly and continuously.

The access to images could have many applications such as maritime safety and timely responses to natural disasters.

The Sentinel-1A orbits the Earth from pole to pole, but only transmits data to Earth when it passes over ground stations in Europe.

Geostationary satellites, which hover 36,000 km above the Earth, have their ground stations in permanent view and stream data to Earth constantly.

"The link is operated at 1.8 Gbit/s, with a design that could scale up to 7.2 Gbit/s in the future. Never has so much data travelled in space," added Vaissiere. - IANS