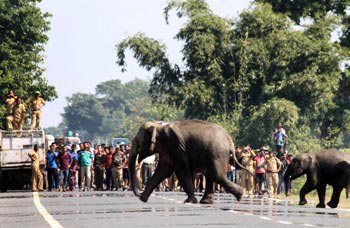 The status of "National Heritage Animal" to elephants has done little to save them, and at least 427 jumbos have perished in the last seven years in Odisha. Though the state claims it has taken steps to protect the animal, experts say industrialisation and urbanisation are the main reasons for elephant deaths.

Elephants are continuously barging into human habitations, triggering a conflict.

At least 23 people and 26 elephants have died in the ongoing human-animal conflict till September, forest department officials told IANS.

A majority of elephants died unnatural deaths because of poaching, poisoning and deliberate electrocution.

According to the 2012 elephant census, its population increased to 1,930 from 1,886 in 2010, despite the death of 149 elephants mostly due to poaching and electrocution.

A total of 353 people died in the human-elephant conflict from 2009-10 till September this year, sources told IANS.

However, the government has failed to formulate any concrete strategy to save the elephants which barge into human habitats, risking their lives as well as wrecking havoc in the area.

Though the government has been planning to implement an "Elephant Corridor Management Plan" across 14 jumbo corridors by cleaning water bodies, planting elephant fodder plants and ensuing connectivity between habitats, the authorities have not been able to go ahead due to mining and other reasons.

As a result, the starving elephants continue to raid human habitations.

"Elephant is a migrant animal. It can't stay in one place. It will move to other places in search of food. Industrialisation and urbanisation has forced the jumbos to move everywhere, falling prey to poachers and deliberate electrocution," wildlife activist Lala A.K. Singh told IANS.

He said elephants are now found in 28 districts, out of 30 districts in the state.

The expert urged both the government and the civil society to shoulder responsibility for protecting the mammals.

There are three elephant reserves in the state - Mayurbhanj, Mahanadi and Sambalpur - along with 14 elephant corridors spread over 870 square km.

Though permission for notification of the South Odisha Elephant Reserve and Baitarani Elephant Reserve were accorded in 2005, the state government is yet to notify these two elephant reserves.

Elephants are even not safe in 19 sanctuaries and national parks in the state, experts said.

In order to protect the jumbos, the government had allotted Rs.21 crore under the Compensatory Afforestation Fund Management and Planning Authority (CAMPA) for strengthening of transmission lines across the elephant corridors in 2013-14.

It also allocated Rs.36 crore to the energy department to strengthen sagging power lines this year.

The government has also constituted district level coordination committees in every district to protect the animals from the live wires.

But no concrete steps have been taken to pull up the sagging electric wires.

"Both the departments are holding coordination meetings to protect the elephants from live wires. The energy department is taking steps to pull up the sagging transmission lines," Principal Chief Conservator of Forest (Wildlife) S.S. Srivastav told IANS.

The elephants have also little chance to survive due to rapid loss of habitat due to mining activities and industrialisation.

Keonjhar, one of the most mined districts in India, earlier had a sizeable number of elephants.

However, many jumbos have left following loss of habitation due to excessive mining.

"Mining is one of the major reasons for death of elephants in the state. We want industrialisation and progress, but it should not be at the loss of wildlife," said Srivastav.

The Karo-Karampada corridor identified by the forest department in Keonjhar district passes by the Bolani mines of SAIL.

The Odisha government has asked the Centre to reserve the Kalarapat bauxite mines in Kalahandi district, which is also coming under the Karlapat Wildlife Sanctuary, to the Odisha Mining Corporation.

The borders of the sanctuary are within one km from the bauxite reserves.

According to the Environment Protection Act, 1986, an area of up to 10 km from the border of any sanctuary or National Park is termed "eco-sensitive" and no developmental or industrial activities are permitted. - IANS