SC directs CBI chief to recuse himself from 2G case 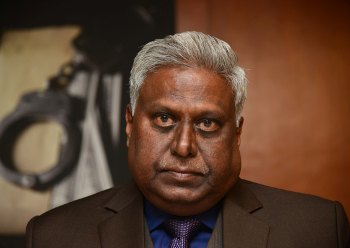 Rapping CBI Director Ranjit Sinha, the Supreme Court Thursday directed him not to interfere with the 2G spectrum case and recuse himself from its investigation and prosecution.

An apex court bench of Chief Justice H.L. Dattu, Justice Madan B. Lokur and Justice A.K. Sikri said that the senior-most officer heading the investigating team probing the 2G case will take over the overall investigations of the 2G cases.

Holding as "credible" the allegations of interference and scuttling of investigation and prosecution by Sinha in the 2G spectrum cases, the court recalled its Sep 15 order directing NGO CPIL to reveal the identity of the whistleblower who gave information on Sinha's alleged interference.

The court, while not passing a detailed order with reasons, said that it was doing so as it would affect and hurt the image of the premier investigation agency.

The court said: "We are not purporting to pass an elaborate order. Prima facie (allegation against Sinha) appears to be credible and requires to be accepted. We reiterate we do not intend to spoil the reputation of the institution by passing a detailed order."

"We suspect your actions. The suspicion is substantiated by Special Public Prosecutor Anand Grover, who is our representative, who has gone through the records. He has given synopsis of the file noting. Prima facie it appears that things are not well. It inspires no confidence and would amount to derailing the trial. You can't brush aside their statements as false and malicious," the court said in the course of the hearing.

Asking Sinha to recuse himself from the investigation of the 2G cases, the court told senior counsel Vikas Singh, appearing for Sinha: "When it appears to us that things are not well, somebody may take over and proceed. We don't want to pass an order casting aspersions on the investigations."

Noting that Sinha's conduct in handling the Dayanidhi Maran case, Reliance Telecom case and DIG Rastogi's case was not inspiring the confidence of the court, Vikas Singh sought to establish the bonafide of the CBI director by taking the court through the noting in the files placed before the court.

The view taken by Sinha in "Dayanidhi Maran in Maxis-Aircel case, Reliance Telecom case, DIG Rastogi's case is a possible view and there could be another way of doing things. But if my action/opinion is bonafides then nothing remains", Vikas Singh told the court, defending Sinha's position taken by Sinha in respect of the Maran and Reliance cases.

Vikas Singh said that Sinha's conduct could not be described as "incorrect, malafide and motivated".

During the course of the hearing, Chief Justice Dattu told Vikas Singh: "A detailed order passed by us may damage the position of great organisation (CBI). Think how we can solve the problem."

As Vikas Singh sought to justify Sinha's actions, the chief justice said: "You have justification but that justification should appeal to us."