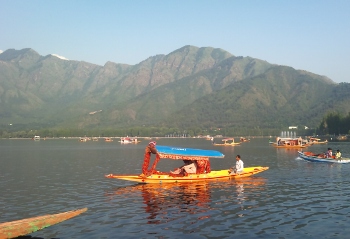 Which is a better place for locating a solar power plant? Hot and sunny Rajasthan or snow-clad Kashmir? If your answer is Rajasthan, you are wrong.

A recent study by Indian researchers has identified the eastern parts of Jammu and Kashmir and the eastern part of Uttarakhand -- in the chilly shadows of the Himalayas -- as areas "with the highest potential for solar energy generation in India".

Traditionally energy that can be generated from sunlight is estimated solely on the basis of the amount of solar radiation incident in a particular place.

But a new study says other parameters like ambient temperature, altitude, wind velocity and weather conditions tend to influence the energy generation to a great deal and therefore these factors must also be taken into account before selecting a place for setting up a solar plant.

The study by Tirumalachetty Harinarayana, director of the Gujarat Energy Research and Management Institute in Gandhinagar, and Jaya Kashyap of the Malla Reddy Engineering College in Hyderabad is published Nov 17 in "Smart Grid and Renewable Energy," an international journal.

"The combination of high altitude and low ambient temperature plays a crucial role in the efficient performance of the photovoltaic (PV) modules while wind velocity is a deciding factor in the energy generation process from the view point of heat transfer," Harinarayana told IANS.

"Therefore, what the developers really require for choosing the best place for locating a solar plant is a map of solar energy 'generation potential' and not just the solar radiation map."

The researchers have for the first time produced such a map for India by simulating the various conditions in a computer and have identified 286 locations with high energy generation potential in different regions of the country.

A more detailed map prepared for three states has identified 266 locations in Gujarat, 231 in Andhra Pradesh and 165 in Telangana.

The researchers have computed the month-wise solar energy generation potential -- and also the total energy that could be generated for the whole year -- at each of these locations.

"The methodology followed in our study is through modelling using standard software programmes," Harinarayana said.

According to their report, most of India has substantial solar energy potential ranging from 680,000 -730,000 kilo-watt hours (KWH) per acre of land, except in Arunachal Pradesh and the eastern part of Assam that have the least potential.

The highest annual solar energy generation (750,000-800,000 KWH per acre) potential has been identified in the eastern parts of Jammu and Kashmir and the eastern part of Uttarakhand.

"Although the incident solar radiation in these regions is low when compared to the rest of the country, the energy generation potential is high due to the ideal combination of solar radiation, ambient temperature and wind velocity," the authors explain.

The annual solar energy generation map of Andhra Pradesh shows a variation from 670,000 to 740,000 KWH. The eastern part of Kurnool, the northern part of Kadapa, and major portions of Ongole and Guntur districts have the least potential and the maximum energy potential (730,000-740,000 KWH) is limited to the western part of Anantapur district.

In the newly formed Telangana state, the northern part of Adilabad and southern part of Mahboobnagar districts have the least energy generation potential (670,000-690,000 KWH) while Khammam and the western parts of Medak district have the highest range (715,000-725,000 KWH).

The authors say the new map they have produced will hopefully help solar developers to correctly estimate the energy generation and therefore the economics of a solar photovoltaic power plant in any place in India before setting it up.

This will help the country achieve the 20,000 MW target of the Jawaharlal Nehru Solar Mission by 2022. - IANS