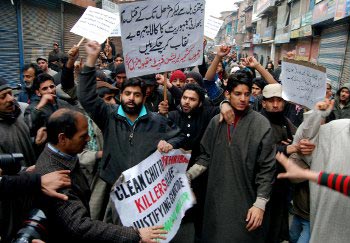 Five armymen have been awarded life sentence for a staged shootout in 2010 in which three youths were killed in Machil area of Jammu and Kashmir's Kupwara district, army sources said.

Chief Minister Omar Abdullah, however, in a tweet said that seven army personnel were awarded life terms for the incident.

Army sources said the five men, including two officers, were sentenced by "summary general court martial" but the sentence was subject to confirmation.

The sources said the army does not take such instances lightly and justice was being delivered speedily after start of the court martial proceedings.

Shezad Ahmad, Muhammad Shafi and Riyaz Ahmad, all from Nadihal village in Baramulla district, were gunned down by the armymen near the Line of Control (LoC) in Machil May 3, 2010.

The army had then claimed that the youths were Pakistan-trained guerrillas who were killed while trying to infiltrate into the Kashmir Valley.

But when pictures of the slain youths were published in newspapers, their families and relatives identified them as three missing youths who had no connection with militancy.

In the aftermath of the alleged staged shootout, protests and clashes with security forces erupted in the Kashmir Valley.

Police investigation established that two men, Abbas Hussain and Bashir Ahmad, who worked with the army, lured the three youths in the name of providing them jobs.

But they were taken to Machil and killed in cold blood.

The families of the deceased in 2010 demanded a trial in a civil court. But the army opted for a general court martial.

Abdullah welcomed the award of sentence in the case.

"The army has handed out life sentences to seven, including the CO (commanding officer), in the Machil fake encounter case of 2010. This is indeed a welcome step," the chief minister posted on Twitter.

"I hope we never see such Machil fake encounter type of incidents ever again and let this serve as a warning to those tempted to try," he added. - IANS