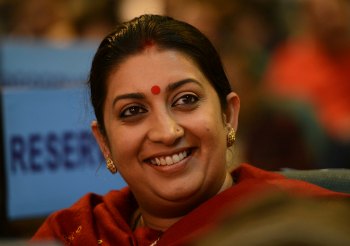 The ministry, through the secretary of higher education, has also sought information on the incident.

"On the 125th birth anniversary of Maulana Abul Kalam Azad, some reports of daughters being insulted are coming, which being a woman are hurting and agitating..." Irani said.

She said it was unfortunate that such statements were coming on a day when the country is celebrating National Education Day.

Aligarh Muslim University Vice Chancellor Lieutenant General Zameer Uddin Shah had Monday turned down a demand from students of Women's College for access to the university's Maulana Azad Library, saying that there would be "four times more boys" in the library if girls were allowed in.

However, he Tuesday said that his statement has been sensationalised.

"These reports are completely wrong. I said there is no space for even a single seat in that library. We are not sexist and we also want women empowerment and certainly don't want to segregate our girls," Shah said.

Defending himself, Shah added: "In the women's college we have given grants of Rs.11 lakh so that the library could be improved with air conditioners like in the Maulana Azad Library. Every book which is there at Maulana Library is already available online for the girls."

Minority Affairs Minister Najma Heptulla said that such statements coming from the head of an institution are "shocking".

Congress leader Rashid Alvi condemned the statement, adding that it was "disrespectful" towards women.

The girl students want access to the Maulana Azad central library as a matter of right which has long been denied to them by successive vice chancellors.

"The officials believe that if the girls are allowed, the library would become more a rendezvous than a serious intellectual platform to pursue studies, and this may not be palatable to the conservative sections of opinion on the campus," an ex-student not wanting to be named, said.

Afra Khanum, honorary secretary, requested the university authorities to build a visitor's room for visiting parents and guardians of the girls.

Responding to the media hype, the university administration Tuesday denied there was any ban on the entry of girl students in the Maulana Azad Library.