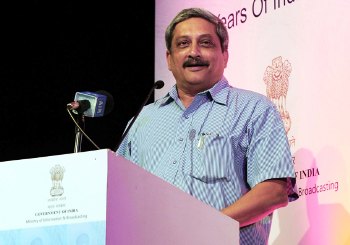 The summoning of Parrikar, state party president Vijay Tendulkar and organising secretary Satish Dhond to Delhi Wednesday for a meeting with Prime Minister Narendra Modi and party president Amit Shah has only lent credence to the rumour that Parrikar's induction in the central cabinet is nearly certain.

BJP state vice president Wilfred Mesquita told IANS that if Parrikar is made a central cabinet minister, the parting would indeed be sad.

"If orders comes, he will have to go... Parting in life is sad. We can never be happy. But if someone goes for better prospects, it is a nice thing," Mesquita said.

Media reports Wednesday hinted at an impending union cabinet expansion in which Parrikar would be allotted the defence portfolio, which is currently being held by Arun Jaitley, who also holds the finance ministry.

Both Parrikar and Tendulkar were unavailable for comment. Congress Rajya Sabha member from Goa, Shantaram Naik, however, told IANS that Parrikar's elevation was "most certain".

"Parrikar himself was lobbying for a cabinet position because he has made a mess of affairs in Goa. Whether it's his inability to resolve the mining problem, law and order, etc. The defence portfolio is his escape ticket from Goa," Naik said.

The social media has also been agog with the possibility of Parrikar's elevation.

"Great, he has excellent administrative skills," says Samir Talkar on a popular Facebook group Goa+. Others are sceptical, asking whether his trademark 'U' turns on decisions related to state administration will now be a regular feature in the union defence ministry.

Others like Rajesh Mandrekar wonder on the same group about what would happen to the BJP in Goa if Parrikar, known as the only "credible" face in the party's state unit, heads for Delhi.

Mesquita has an answer ready for such skeptics. The BJP in Goa, he says, is brimming with chief ministerial talent.

"We have got so many. We will have to go in alphabetical order," he said.

Party sources said that the names of current Deputy Chief Minister Francis D'Souza and Speaker of the Goa legislative assembly Rajendra Arlekar are in the reckoning for the chief minister's position, should Parrikar's elevation to the central cabinet take place. - IANS