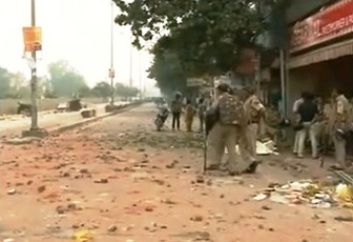 Inspired by Prime Minister Narendra Modi's call for a clean India, 35-year-old Laila Shah wielded the broom and started collecting shards of broken glass and bricks from the narrow lanes of east Delhi's Trilokpuri area in the wake of Hindu-Muslim clashes.

"After looking at the broken pieces of glasses and bricks strewn on the roads, I felt the need to clean up my neighbourhood - as urged by (Narendra) Modi - and hence picked up the broom and decided to lead the safai abhiyaan (cleanliness drive)" Shah, a eunuch, told IANS.

A resident of Trilokpuri's Block 35, Shah was joined by four of her kin who stay with her in a four-storeyed house.

"My friends and I cleaned the area for almost four hours. And I was extremely happy to see other families (both Hindu and Muslim) join us in cleaning our area," she smiled.

She said they were later also joined by civic officials who were earlier scared to enter the area due to the prevailing tensions.

The Trilokpuri area, which is divided into 36 blocks, witnessed a clash between two groups of Hindus and Muslims on Diwali (Oct 23). The authorities imposed prohibitory orders under Section 144 of the Criminal Procedure Code (CrPC) banning the gathering of more than four people.

Shah, who has been living in the area for the past 20 years, said she stepped out of her home while the prohibitory orders were still in place.

"The fight began Friday and intermittently continued till Sunday. During that time, I could hear the loud cries and shouts of the residents. Some people even tried to enter my block, but we all guarded the gate, barring their entry," Shah said.

She said that a few members of the mob even threatened to pour acid on her, but "I did not relent". - IANS