Devendra Fadnavis is known for keeping his word 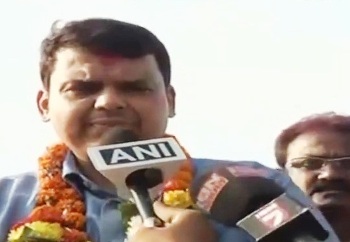 Devendra G. Fadnavis, Maharashtra's new chief minister-to-be, is a down to earth man with RSS roots who became a BJP corporator when he was barely 22.

Now 44, Fadnavis is Maharashtra's youngest chief minister after Sharad Pawar, who was only 38 in 1978, and the second Brahmin to preside over the state's affairs after the Shiv Sena's Manohar Joshi.

His colleagues in the Bharatiya Janata Party have high regard for Fadnavis, who, they say, keeps his word -- a rare trait in politics -- and has a sound understanding of business matters.

His oratory has won him many admirers.

Aware of the Maratha domination of Maharashtra politics, Fadnavis underplays his caste. "Maharashtra has moved beyond such criteria. Today's youths want development, progress."

A late entrant to the political arena, the 1970-born Fadnavis' rise in the BJP is considered virtually meteoric.

A Rashtriya Swayamsevak Sangh activist while in school, he was with the Akhil Bharatiya Vidyarthi Parishad (ABVP), the student wing of the BJP, in college.

He learnt his first political lessons from his legislator-father, the late Gangadhar R. Fadnavis, and mother Sarita, who was a director with the Vidarbha Housing Credit Society.

In 1992, at age 22, Fadnavis surprised many by getting elected as a corporator and, five years later, became the youngest mayor of the Nagpur Municipal Corporation. The RSS is headquartered in Nagpur.

He was elected to the Maharashtra assembly for the first time in 1999. He won for a fourth time this year.

Armed with a law degree and a post-graduate degree in business management, Fadnavis can speak with authority on virtually any topic - and with an analytical mind.

He has bagged several national and international honours, including the Commonwealth Parliamentary Association's "Best Parliamentarian Award" in 2002-03.

"Fadnavis respects all and does no wrong to anyone... He will seek advice from colleagues and juniors but only follow his instincts. He is a patient man and can defuse all tensions," a BJP leader told IANS.

In a state where it has always been a junior partner to the Shiv Sena, the BJP took note of Fadnavis' talents in mid-2013 when it catapulted him as the Maharashtra state unit president.

He was 43 then, the youngest in the BJP to hold the post.

Fadnavis was initially intended to balance the regional-caste criteria and be a suitable replacement for the other BJP veteran, Nitin Gadkari.

But he quickly became the prime force to reckon with.

This year, he had the onerous task of proving his mettle in the Lok Sabha battle. Thanks to a Modi wave, it was not a difficult task and the BJP won 23 of the 48 seats -- up from just nine in 2009.

In the run-up to the assembly polls, despite Modi's presence, Fadnavis independently addressed around 100 election rallies, expanding his rapport with party activists -- and became better known across the state.

Fadnavis is married to private bank manager Amruta. The couple have a teenaged daughter, Divija.