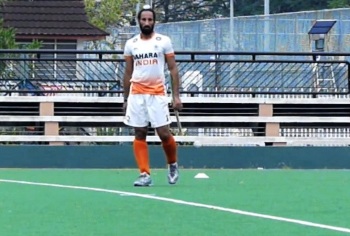 Terming the Asian Games gold as the best moment of his playing career, the Indian men’s hockey team skipper Sardar Singh said that the yellow metal at Incheon was a culmination of two years of hard work, plan and strategy.

“After we finished last in the 2012 Olympics, we put in all our plans and efforts to win Asian Games and qualify for the 2016 Rio Olympics. And when the time arrived, we delivered our best to achieve the goal,” Sardar told IANS in an interview.

Winning the Asiad gold made India the first country to qualify for the men's hockey tournament at the 2016 Olympics.

“We badly wanted to qualify early for the Olympics as we have seen on previous occasions that it can become really difficult towards the end. All the boys have put in loads of hard work in the last two years and especially with chief coach Terry Walsh, our training was very effective. So, the gold is a culmination of all of these things.”

In the title clash against arch rivals and defending champions Pakistan earlier this month, India had prevailed 4-2 in a penalty shootout after the regulation period score read 1-1, to win the Asiad gold after a gap of 16 years.

“We failed to produce results in the World Cup and finished runners-up to Australia in the Commonwealth Games. But we kept improving our game day-by-day. Despite the results not coming our way, we didn't lose our focus and hunger which helped,” the ace centre-half said.

“In my eight years of international career, I have seen a lot of low moments as well as some high points. But being the Asiad champion is the biggest success in my life,” the 28-year-old said.

But Sardar, who featured twice in the international hockey federation's (FIH) World XI in 2010 and 2011, said that his team must still work on their grey areas.

“We conceded late goals to lose two matches in the World Cup. But we corrected the errors and lately, we have been successful in avoiding last minute goals in the Commonwealth Games and the Asiad. However, we are still committing some mistakes on the field. We must improve on our penalty corner conversions, defence and circle penetration," added the captain.

Regarding the upcoming bilateral series against Australia, Sardar said that playing against the World Champions will help them improve their game.

"We have a series against Australia which will help us in improving our game. We will learn a lot of things by playing against the best team in the world next month. We want to improve as a team with an eye on Rio 2016,” he concluded.
- IANS