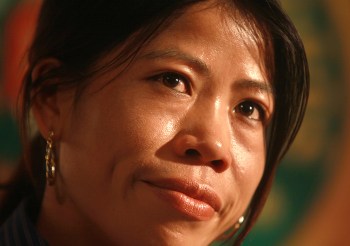 Mary, a five-time World Champion, defeated Shekerbekova 2-0, with one judge scoring the bout 38-38 in the 17th Asian Games at the Seonhak Gymnasium.

The 31-year-old Indian took some time to be at her attacking best and got just 27 points in the first round.

Backed by a boisterous Indian crowd, Mary Kom, a mother of three and police officer in India's northeastern state of Manipur, banked upon her experience and mixed aggression with caution to counter the speed of her 25-year-old opponent.

Mary Kom, a bronze medallist from the 2012 London Olympics, won the second round 29-28.

The Indian boxer kept her intensity up in the third round as well and while the Kazakh girl looked physically stronger, her jabs and punches lacked accuracy that helped the Indian to take the third round 30-27.

In the fourth round, Mary Kom, multiple-time Asian Championships gold medallist, looked more confident and landed heavy blows on Shekerbekova to gain another 30-27 verdict, which facilitated her historic win.

Overall, the first and the third judge favoured Mary, bronze medallist in 2010 Asiad, with scores of 39-37 while the second judge gave a tie 38-38.

With this win, Mary Kom, who took some time off the ring after the London Olympics due to the birth of her third child, completed her comeback and also gave a fitting reply to Indian officials who had dropped her name from the Commonwealth Games in Glasgow in August.