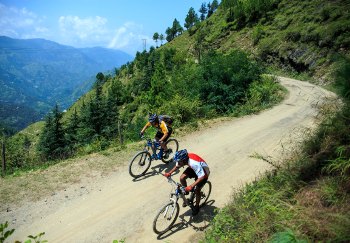 Himachal Pradesh is riding high on a popularity wave among mountain bikers - both Indians and foreigners. More and more of them are negotiating sharp bends on inhospitable off-road tracks of the lower Himalayas for their slice of glory.

Canadian National Champion Cory Wallace, also the three-time champion of the Mongolia Bike Challenge, and Sonia Lopes, the first woman cyclist to conquer the non-stop 500-km Portugal Bike Race, will be among 70 foreign and Indian intrepid riders in the Hero MTB Himalaya, the 10th in series, from Sep 27 to Oct 3.

"The mighty Himalayas, breathtaking routes and the vibrancy of India is what attract me to this race," Cory said in a communication to Himalayan Adventure Sports and Tourism Promotion Association (HASTPA), the Shimla-based club organising the race.

HASTPA president Mohit Sood told IANS the rally route, through the lesser explored interiors of the lower Himalayas, would climb the Jalori Pass (3,223 metres) in Kullu district, the toughest point of the rally.

Wolf Gang Krenn from Austria, John Funk from Canada, Andreas Hartman from Germany and Aayman Tamang from Nepal are other prominent international riders, besides a 14-member team from the Indian Army's adventure wing.

Last year, World No.9 Luis Leao Pinto was among the internationally-acclaimed riders at the event.

Pinto, the MTB Himalaya champion in 2013, had said he had captured ranges from 2,000 metres to 2,300 metres in Europe but the mighty hills of Himachal Pradesh were quite a challenge for him.

Billed as the third toughest mountain biking event in the world after the Trans-Alps Challenge (Europe) and the Trans-Rockies (Canada), the Hero MTB Himalaya will be flagged off from the state capital Sep 27.

The participants, both men and women, will pass through forest trails and unmetalled rural roads, winding through Shimla and Kullu districts.

The slopes of Jalori Pass are one of the finest in the world, said Cycling Federation of India member Rakesh Mohindra.

Sood said 85 percent of the total track of the rally passes through terrain riddled with obstacles such as trees and boulders.

"Such kind of a single and muddy track at this altitude is rarely available across the world. The international cyclists are opting for the lower Himalayas for high-altitude training," he said.

He said initially this rally used to see mostly foreigners. But for the past three-four years, it's also getting popular among Indians.

"It has always been our objective to involve more women in the sport. Unfortunately, not too many women in India have taken to mountain biking. Lopes' presence will definitely inspire a lot of young women to follow and take up this great sport," HASTPA general secretary Akhil Puri said.

Portuguese rider Luis Canto Moniz, Ferrari's general manager based in Bangkok, told IANS: "I am happy that such events are picking up speed in India. It's quite popular in Europe, North America and Canada. Himachal's terrain offers the most challenging environment in the Himalayas."

There are separate categories for men and women in the race.

The rally will pass through Shimla, Narkanda, Ani, Jibbi, Ghadagushaini, Chatri to Luhri, then back to Narkanda and finally culminate in the state capital Oct 3. - IANS