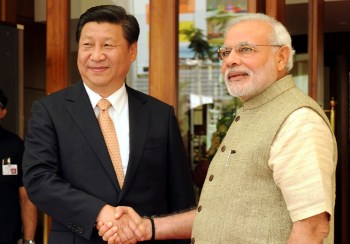 Prime Minister Narendra Modi played the role of a spirited guide Wednesday as he took Chinese president Xi Jinping on a visit to the historic Sabarmati Ashram here, detailing him about the place which had been epicentre of Mahatma Gandhi's activities for many years.

Modi, who arrived at the ashram 10 minutes before Xi, was seen interacting with children until the visiting dignitary arrived.

Modi and Gujarat Chief Minister Anandiben Patel accorded a warm welcome to Xi and garlanded him with khadi threads.

The prime minister accompanied Xi along the red carpet leading to the ashram, often interacting with the Chinese president with the help of interpreters.

As the two leaders roamed around in the different compartments, in the backdrop of 'bhajans' being sung by children, Modi took a special interest in describing to his guest about Mahatma Gandhi's personal belongings.

At one point, Modi stopped to read out an inscription to Xi, who had changed to a white Khadi jacket and shirt suiting the serene place from where Mahatma Gandhi had commenced the famous "Dandi March" Mar 12, 1930.

The march, in which Mahatma Gandhi embarked on along with 78 of his companions, was an unprecedented and unique way to protest the British salt law.

Modi guided Xi to the black and white photograph exhibition on the Indian freedom struggle, to the personal room of Mahatma Gandhi's wife Kasturba Gandhi and then to Hriday Kunj, where the Chinese dignitary removed his shoes and sat on the floor to spin "Charkha".

The Hruday Kunj - with its elegant, airy and simple architecture - is the place where Mahatma Gandhi spent a good period of time.

Besides, Xi paid floral tributes to Mahatma Gandhi's statue and garlanded his potrait in one of the chambers in the ashram.

The Chinese president wrote in the visitor's book of the ashram as the hymn "Raghupati Raghav Raja Ram" being sung in the background.