Paradise on Earth becomes horror for its residents 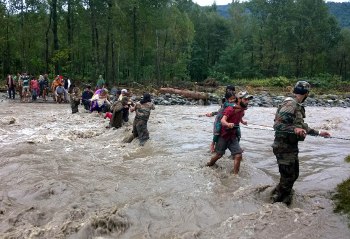 As historical records confirm that the recent floods in Kashmir have been worse than the worst ever - that in 1893 - the human suffering and devastation caused have few parallels in the Valley's recent history.

While Lawrence says the areas on the left bank of the Jhelum were part of the city's flood basin in 1893, today it has densely-populated residential and commercial areas of Rajbagh, Jawahar Nagar, Gogjibagh, Wazirbagh, Natipora, Chanapora, Barzalla, Santnagar, Rawalpora, Peerbagh, Bemina, Qamarwari and a dozen others.

The flood waters that hit the Valley like a Tsunami during the intervening night of Sep 6-7, inundated all these areas. While the present population of the city is 1.45 million, over 600,000 people lived in the inundated areas.

The army immediately swung into action while personnel of the Indian Air Force and the NDRF came in a day later Sep 8.

The state administration, as Chief Minister Omar Abdullah admitted, "was washed away by the floods" which had never in the past ravaged the capital city so brutally.

More than 200,000 have been rescued from the inundated residential areas but officials say over 100,000 are still trapped in their homes.

Most of them now refuse to come out after reports of looting and burglaries in the areas where residents abandoned all their belongings during rescue operations to save their lives.

In relief camps and inundated areas, supplies of essentials of life, including medicines, are a major problem faced by the state and the central governments.

The complete collapse of road and telecom connectivity has created a situation where rumour-mongers and anti-social elements are adding to the miseries of the flood victims and the administration which is trying to help the suffering masses.

Relief material has been pouring over from different parts of the Valley into Srinagar, where volunteers and senior citizens are helping to ensure that it reaches the right quarters.

The authorities have confirmed only 29 deaths in the Valley but, given the number of missing people, the death toll is feared to rise after the submerged areas are drained.

The water level in the Jhelum is falling, but given the fact that the flood waters in inundated areas are coming down only by inches, these areas would take months to clear unless drainage pumps are used.

There is an acute shortage of petrol and diesel in the Valley as the Jammu-Srinagar highway through which all supplies are routed into the Valley remained closed Monday for the 12th consecutive day.

The authorities are now trying to route supplies through the Kishtwar-Anantnag and the Manali-Leh-Srinagar roads but unless the Jammu-Srinagar highway is re-opened, the present crisis would not end.

People in areas where the flood waters did not enter are indulging in panic buying and stocking essentials.

Thousands of vehicles, including those owned by the state government and civilians, have either been washed away or remain submerged in the inundated areas.

The fear of outbreak of diseases like cholera, gastroenteritis and other water-borne diseases looms large on Srinagar, where animal carcasses, over-flowing sewerage tanks and filth at many places are already producing an unbearable foul stench.

While the authorities claim property and infrastructure worth Rs 6,000 crore ($984 million) have been destroyed, quantifying the actual damage will remain a wild guess till roads open and all inundated areas are cleared.

The houses in inundated areas will not be safe for living for at least three months even after the areas have been drained, say experts.

The majority of the Valley's workforce, including labourers, masons, carpenters, brick-layers, plumbers et al belonging to other states of the country is only waiting to leave as winter would set in here in the next two months.

In short, Kashmir the Paradise on Earth is today a nightmarish horror for its residents. It would take years for this Paradise to reclaim its lost glory. - IANS