Nehru to Modi: The riverfront diplomacy 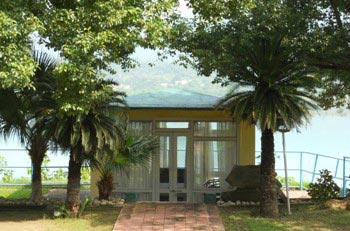 As Prime Minister Narendra Modi sits down to host Chinese President Xi Jinping at Ahmedabad's Sabarmati Riverfront this Wednesday, it will not be a first such riverfront interaction between two top leaders of both countries.

Almost 50 years ago, this small town in Punjab hosted Chinese premier Zhou Enlai on the invitation of the country's first prime minister, Jawaharlal Nehru. The location was the Sutlej riverfront with magnificent hills in the backdrop.

The 'Glass House', where both Nehru and Enlai met and discussed the "Panchsheel Principles of Mutual Co-Existence", today stands as a testimony of the historical meeting here. Some of the furniture used at that time, in the mid-1950s, is still there.

The small, single room glass house is located inside the complex of the 'Sutlej Sadan', a government guest house managed by the Bhakra Beas Management Board (BBMB). A small rock placed outside the glass house points out that the 'Panchsheel Principles' were discussed at this riverfront location.

"It is another matter that despite the bonhomie displayed by both leaders here at that time, both countries went to war just years later in 1962. The 'Hindi-Chini bhai bhai' slogan, which the Chinese leadership used to say, had no meaning," Ram Rattan, an old timer in Nangal, told IANS while re-counting the visit of the Chinese premier.

"Though a lot of things have changed since then, India needs to tackle China cautiously. The riverfront diplomacy, whether in Nangal or Ahmedabad, is good but our historical experience has not really been great," Rattan pointed out with a note of caution.

Nangal town, located about 110 km from Chandigarh and a population of around 45,000, is more famous for the 225-metre high Bhakra Dam near here. The Bhakra-Nangal project has been one of the pioneer hydro-electric projects in post-independent India with Prime Minister Nehru describing it as a "Temple of a resurgent India".

Unlike the nondescript glass house in Nangal, the 600-year-old city of Ahmedabad has been spruced up to host the top leaders of the world's two most populous countries who will meet and dine at the Riverfront Park, on the banks of the Sabarmati river in the upscale Shahi Baug area.

The park has got a new look with rustic rural Gujarati ambience especially created for the leaders to indulge in a sumptuous candle-light dinner and some "guppa-guppi" (banter in Gujarati).

In the fore and backgrounds, there will be a cultural programme of tribal and folk dances and music, along with Garba and Dandiya - the state's favourite, graceful yet robust dance form - which is what the upcoming nine-day Navratri festival is all about.

Five huge air-conditioned domes have been created at the picturesque Riverfront Park on the river's eastern bank, where the two dignitaries and a select 150 guests shall savour pure vegetarian and exquisite Gujarati cuisine prepared by top chefs.

Security has been beefed up at the riverfront where Modi will spend around 95 minutes along with Xi Jinping. Modi and Xi will take a walk along with river front and have dinner. Special lighting has been installed on the riverfront. - IANS