'I doubt if any Kashmiri will stone the security forces again' 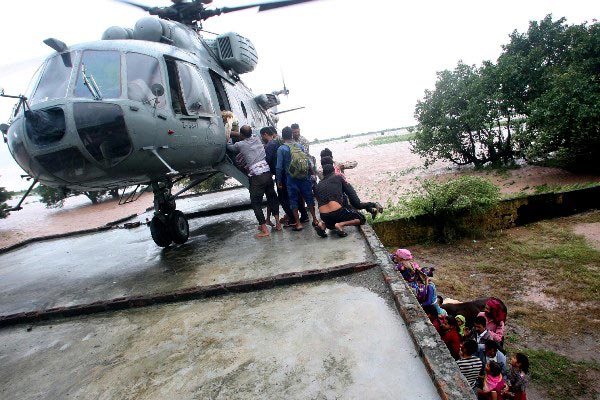 When it began raining a week ago in the Kashmir Valley, most people welcomed the showers, hoping it will give us a rich agricultural harvest. The nature's wrath has now turned into an unmitigated disaster.

As the rains turned into a non-stop day-and-night downpour, easing only on the sixth day, we knew we were caught up in Kashmir's worst flood fury in half a century.

The full extent of the devastation will be known only when the Jhelum river subsides and we learn the reality from the remote and now cut-off parts of the Kashmir Valley.

Within 48 hours after the clouds opened up, every stream and every river in the valley was swollen, flowing to the brim.

Very soon, the embankments gave away.

In the past, the overflowing Jhelum would avoid embracing Srinagar, causing huge losses in the area around Kandzal on the outskirts. This time, fate willed it otherwise.

In no time, panic gripped Srinagar as flood waters entered homes, shops, mosques, schools, colleges, hospitals and virtually every building in the city, sparing only the Old City that stands on higher ground.

There is no power in Srinagar. Potable water has run out in most houses. Most residents now live on their terrace, praying and hoping for a miraculous rescue.

There is no food to cook. Household goods collected over the years have been submerged in water.

A retired chief engineer I know, Khwaja Nizzar Hussain, has taken shelter with his elderly wife and college-teacher-daughter on the roof of their house in Gogji Bagh.

Monday was the family's third day of torture.

Multiply him by tens of thousands, and you will realise what is happening in Srinagar.

There is 15 -- yes, fifteen -- feet of water in some parts of Srinagar including Rajbagh and Jawahar Nagar.

In these places, two-storey and three-storey houses have almost gone under water, sparing only the roofs, as if by divine design.

The Jhelum river, the pride of Kashmir, has turned into a sudden foe.

I live a little away from Srinagar. I tried Sunday to reach the city. And realised that Jammu and Kashmir's summer capital is virtually cut off from the rest of the state -- and the world -- except by air.

An estimated 150,000 people are now homeless, their houses completely or partly damaged.

And in a city that relies on bridges, 70 of them have been washed away.

Television and radio stations are dead. The roads leading to the valley are under water. Only some mobile phones are functional. Internet connectivity is gone.

The wireless network of the Jammu and Kashmir Police is mercifully still working. But it is near impossible to contact, on phone, the top officers of the civil and police administration.

Chief Minister Omar Abdullah says he has ordered 70 boats from the central government to rescue the marooned.

Srinagar can today be approached only by boats. And, yes, you can see them being rowed by people, desperately trying to reach some place where they can store the precious little bundles they have salvaged.

There is no doubt that no one had prepared for a calamity of this sort. The present floods, elders say, makes the devastating floods of the 1950s look like child's play.

One has to still admire the manner in which the police, the CRPF and the army have responded to the human tragedy.

God alone knows how many Kashmiri men, women and children they have rescued under difficult and often dangerous circumstances - in Srinagar and beyond.

I doubt if any Kashmiri who has seen the security forces at work will dare to hurl stones at them ever again. - IANS

(Sheikh Qayoom is a reporter with IANS from Srinagar)