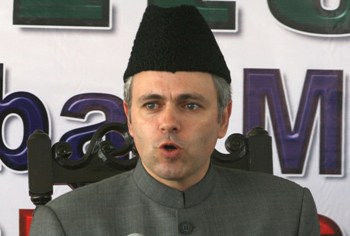 Jammu and Kashmir Chief Minister Omar Abdullah Tuesday said residents of areas near the boundary between India and Pakistan in the state bear the brunt on border skirmishes, making their lives miserable and difficult.

Visiting areas close to the international border in Jammu district where ceasefire violations by Pakistan have forced residents to migrate to safer places, he said people living near the Line of Control (LoC) and the border have to bear the brunt of firing and shelling and their life and property is endangered by such incidents.

Noting the state is greatly and commonly affected by such incidents, Abdullah said peace and tranquillity on borders is equally important for both the neighbours and maintained that the authorities across the border should understand this need and help in creating calm at the LOC and the frontier.

Stressed people living in the frontier area want peace to carry on their lives smoothly. He reiterated it was talks that could solve the issue.

"We do not subscribe to war but are in favour of resolving the issues through talks and in a peaceful manner," he added.

Abdullah, while interacting with the affected families at Joia, Trewa, Saikalan, Jora, Jabowal, Jangian and various other places in the border area in R. S. Pora and Bishnah sectors, announced three months free ration for those who had to leave their homes and whose agricultural operation has come to a standstill due to the cross-border firing.

He said that the state Government has taken all measures to provide necessary relief to them as also safeguarding their lives.

"We are with you at this hour of need," he told them, adding that the administration is fully geared up to help them.

Abdullah said that he has given directions to all agencies concerned to do all that is possible to safeguard and help the people in these areas.

The state government has already taken up the issue of construction of bunkers and setting up shelters in nearby areas for the people who are generally affected by the shelling from across the border and had to leave the their homes for safety.

He said the file in this regard is pending at the central government and the state government would again take up the matter with union Home Minister Rajnath Singh during his upcoming visit. - IANS