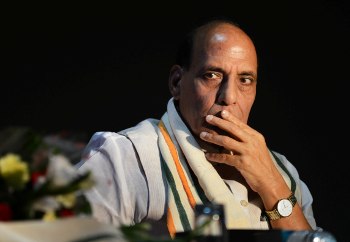 Union Home Minister Rajnath Singh is one of the few politicians in the country to perpetually wear a smile. Be it the loss in the Uttar Pradesh assembly polls when he was chief minister or the failure of the party to make a comeback at the centre in 2009, the 63-year-old former physics lecturer does not let politics affect his disposition.

The last few days, however, seem to have brought a sea change.

On his first visit to the state capital, which he represents in the Lok Sabha, Rajnath Singh appeared rather sublime and to himself in his public appearances. His jovial self and characteristic guffaws were also missing in his chat with local reporters, whom he unfailingly meets at his 4, Kalidas Marg residence.

Faced with media reports that his son Pankaj Singh had been ticked off by Prime Minister Narendra Modi for seeking a bribe from police officers for transfers and favorable postings, Rajnath ducked questions and said: "God knew what I am".

Asked to react to the charges against his son, Rajnath Singh retorted: "Yeh kal chakra hai, Vidhata hi jaane (These are changing times, God knows all)."

He also refused to be drawn into whodunit questions. Noting that his life was an open book and that with time the truth will surface, he told reporters that some of them were investigative journalists and hence should dig deep to know further. He also said that rumours spread fast and cannot be traced. "Afwahon ke pair nahin hote (Rumours fly thick and fast),".

The home minister, however, appeared perturbed at the turn of events as was evident from the fact that he chose to curtail his trip by a few hours as he flew back to Delhi early. A close aide, who has been on Rajnath Singh's personal staff for over a decade, confided to IANS: "Mananiya (sir) is disturbed as he has led a spotless life and even the smallest insinuation hurts him."

Lucknow Mayor Dinesh Sharma, recently elevated as a BJP vice president, told IANS: "Rajnath-ji's life is above board and through his honesty he had earned the respect from the political spectrum. He has earned respect for himself through his transparent and honest working style."

Even his political adversaries like Sharad Yadav of the Janata Dal-United had given him a clean chit, Sharma added, noting that Rajnath Singh had been a chief minister, a union minister twice but not one finger had been raised on his probity.

Asked whether he saw any contrast in the work style of Rajnath Singh and Pankaj Singh, Sharma said he had for long worked with the latter and had found nothing amiss in him. "Despite being a hardworking and deserving person, his candidature for various posts has been shot down by Rajnath Singh himself. Had he not been Rajnath Singh's son, he would have been a legislator 10 years back," Sharma added.

Another ministerial colleague, who did not wish to be named, said that while the home minister was often accused of promoting Thakurs at the cost of merit during his stint as chief minister, graft charges have never been levelled against him.

Not one to share a very cordial relationship with Rajnath Singh, another leader dittoed this, saying that he has always kept his family aloof from official work and the "privileges of his office were never reserved for the family".

Insiders admit that both Savitri Singh, Rajnath Singh's wife, and Pankaj Singh are accessible to workers and party supporters and do often get requests for favours like any other political leader does. However, there was a "firm lakshman rekha" in the family set by Rajnath Singh that forbade them into forwarding the requests further, one insider said. Even his close associates, sources said, have been told a long time ago not to "entertain such people."

State BJP leaders, however, confide in private that the wily Thakur has tied himself in knots by reacting on an unsubstantiated rumour. "As per reports the charge and the subsequent follow-up were a matter between Narendra Modi, Rajnath Singh and Pankaj. How then did it come out and what was the tearing hurry to react on such issues," asked a senior leader who did not wish to be named.

However, by all accounts it appears that the No.2 in the Modi government has for now weathered the political storm. - IANS