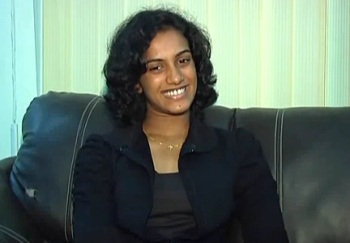 Leading Indian shuttler P.V. Sindhu created history Friday by reaching the women's singles semi-finals and assuring herself of at least a bronze medal finish at the World Championships here.

By achieving the feat, the 19-year-old Hyderabadi was in line to become the first Indian to win two medals at the sport's most prestigious event having won the bronze last year at Guangzhou in China.

The 11th seeded Hyderabadi proved that she belongs right at the top of the sport by defeating Chinese World No.2 Shixian Wang 19-21, 21-19, 21-15 in a marathon match which lasted an hour and 25 minutes at the 9,200-seater stadium.

This is World No.12 Sindhu's fourth victory over second seeded Shixian in six meetings.

Meanwhile, her compatriot and seventh seed Saina Nehwal had to once again suffer a quarter-final defeat at the world meet when she lost 15-21, 15-21 in 45 minutes to Chinese World No.1 and top seed Li Xuerui.

The last-eight match seems to be a jinx for the World No.7 Saina, who has now lost five matches on the trot at the Worlds since 2009.

This is only the fourth time that an Indian was in line for a medal at the World Championships. Legendary Prakash Padukone started the trend here in 1983 when he won the men's singles bronze. It took Indian shuttlers another 28 years to win a bronze when Jwala Gutta and Ashwini Ponnappa clinched the women's doubles bronze in 2011.

The Hydarabadi teenager won the women's singles bronze last year and now was in line for a back-to-back medal at the prestigious world event.

Sindhu has a great chance of improving on the colour of the medal when she takes on the winner of the match between Chinese Taipei's eighth seed Tzu Ying Tai and Spanish ninth seed Carolina Marin in the semi-finals Saturday. - IANS