The Untold Story of Kachchativu - Time for Modi to Act 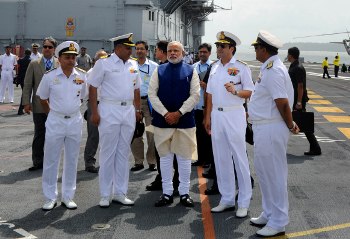 The Supreme Court, by clubbing together the petitions of Tamil Nadu Chief Minister Jayalalithaa and DMK leader M Karunanidhi on the retrieval of Kachchativu, an islet in the Palk Strait India ceded to Sri Lanka in 1974, for final hearing by a Bench of Justices HL Dattu and SS Bobde, has put the BJP government of Narendra Modi in a dilemma.

While the UPA government had taken the stand that Kachchativu had never been a part of Indian territory, the petitions of the two Tamil Nadu leaders, backed by historical documents and revenue records, maintain that the islet was very much a part of the State and its cession has been responsible for the deaths of hundreds of local fishermen and their continued harassment by the Sri Lankan Navy.

Kachchativu was propelled into centre-stage of Indo-Sri Lanka relations for the first time in March 1966 during the annual festival of St Antony, patron saint of the fishermen. The only permanent structure in the 285-acre uninhabited islet is St. Antony’s church built by a fisherman from Ramanathapuram by name Seenikuppan around 1905.

The annual festival usually falls in the month of March and draws large crowds from both India and Sri Lanka. By mid-1960s the islet had become a staging post for illegal immigrants and a thriving centre for exchange of illicit foreign goods.

In March 1966, Sri Lanka posted its Task Force for the Prevention of Illicit Immigration (TAFII) in Kachchativu and arrested 120 people from India who had crossed over to Kayts and Delft islands off the Jaffna coast.

Since then, Sri Lanka has been demanding cession of the barren Kachchativu, bearing Survey No. 1250 of Rameshwaram village of Ramanathapuram district, Tamil Nadu, more as a measure of preventing illegal immigrants, popularly known as kallathoni, than as territorial aggrandisement.

The first attempt by Sri Lanka to annex Kachchativu was made in 1921 when the two countries wanted to enter into a Fisheries Agreement. It failed because Sri Lanka wanted to bring Kachchativu on its side of demarcation which had been an integral part of the Ramanathapuram Zamindari for centuries.

On 8 March 1968, Dinesh Singh, then External Affairs Minister, informed Parliament, “Kachchativu belongs to India. We have established effective control over this island and that is amply established by historical records. Nothing done or said since then has altered that position.”

Sri Lankan Prime Minister Sirimavo Bandaranaike was invited by Indira Gandhi to be the guest of honour at the Republic Day celebrations on 26 January 1974. In an expansive mood Indira Gandhi offered to cede Kachchativu to boost the sagging image of the Sri Lankan Prime Minister and asked officials on both sides to prepare the necessary legal documents.

SP Jagota, director of Legal and Treaties Division, New Delhi, came out with the brilliant idea. “The boundary line between India and Sri Lanka followed the median line, except as adjusted in the Palk Bay in relation to the settlement of Kachchativu.”

Accordingly, the boundary line was drawn so as to pass one mile west of Kachchativu bringing it within the maritime boundaries of Sri Lanka. The agreement was signed by Sirimavo Bandaranaike in Colombo on 26 June 1974 and in utter secrecy in New Delhi by Indira Gandhi on 28 June 1974, with adequate safeguards for Indian fishermen and pilgrims.

Atal Behari Vajpayee, who was in Mumbai then, came to know of Indira Gandhi gifting Kachchativu to Sri Lanka without observing the legal provisions contained in the Constitution. He telephoned Jana Krishnamoorthy in Chennai, then leader of the Tamil Nadu unit of the Jana Sangh who subsequently became the president of the BJP, to challenge the agreement in the Supreme Court, citing the ruling in the Berubari case.

When the Nehru government tried to cede Berubari to East Pakistan (now Bangladesh), the Supreme Court struck it down saying any territory of India could be ceded to another country only through a constitutional amendment.

The Jana Sangh petition came before Justice PN Bhagawati who was elevated to the Supreme Court the previous year, 1973. On 25 April 1973, the day following the historic Kesavananda judgment, Indira Gandhi, disregarding objections raised by President VV Giri, announced the appointment of Justice AN Ray as the Chief Justice of India, superseding Justices Shelat, Hegde and Grover.

CJI Sikri, who was to retire the following day, was so incensed that he joined the superseded judges and resigned on 25 April itself. Committed judiciary (to the ruling dispensation) was the flavour of the day. Justice Bhagawati, who was in the line of succession to become the CJI 12 years later, had no hesitation in dismissing the Jana Sangh petition at the admission stage itself.

While the Jana Sangh was the first political party to seek the legal route to retrieve Kachchativu, Subramanian Swamy, chairman of the BJP Committee for Strategic Action, had gone a step further. Even as the Sri Lankan Navy stepped up its harassment of fishermen from Tamil Nadu in the “historical waters” and began shooting them dead, Swamy, braving bullets, reached Kachchativu in a mechanised boat from Rameshwaram and hoisted the Indian national flag to reinstate the country’s sovereignty over the islet.

Narendra Modi can ill afford to ignore the contribution of his party stalwarts towards the retrieval of Kachchativu while filing a fresh affidavit in the Supreme Court before the final hearing.

Pending disposal of the petitions of Jayalalithaa and Karunanidhi, Modi should insist Sri Lanka honour the terms of the 1974 agreement, signed by the Prime Ministers of the two countries, in letter and in spirit. Article 5 of the agreement says, “Indian fishermen and pilgrims will enjoy access to visit Kachchativu as hitherto, and will not be required by Sri Lanka to obtain travel documents or visas for these purposes.” Article 6 says, “The vessels of Sri Lanka and India will enjoy in each other’s waters such rights as they have traditionally enjoyed therein.” The only traditional right they enjoyed was fishing in these waters.

Sri Lanka has reneged on these terms and conditions of the 1974 agreement. According to Article 60 of the Vienna Convention on the Law of Treaties, 1969, if one of the contracting parties has committed any breach of provisions of the treaty, it can be terminated. It is not only the 1974 treaty on Kachchativu that Sri Lanka had breached, but also 1987 treaty signed by Prime Minister Rajiv Gandhi and Sri Lankan President JR Jayawardene.

President Mahinda Rajapaksa by refusing to implement the agreement has rebuffed Modi himself. Until these issues are sorted out either by a ruling of the Supreme Court or through bilateral dialogue, the BJP government should order the Indian Navy and Coast Guards to give protection to fishermen in the historical waters of the Palk Bay.