Politics of jeering: Is it countdown to assembly elections? 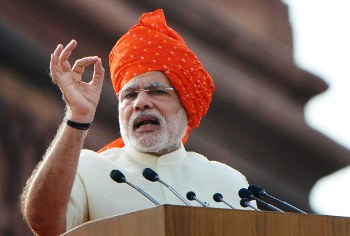 Prime Minister Narendra Modi faces the first big political challenge of his three month-old government over heckling of opposition chief ministers of poll-bound states at his official events with the issue threatening to turn into a major controversy and souring relations between BJP and other parties.

Congress chief ministers have signalled their unwillingness to share the stage with Modi at official functions unless there was a change in the attitude of Bharatiya Janata Party leaders.

The heckling of Jharkhand Chief Minister Hemant Soren during an event Thursday in the presence of Modi had an ugly fallout with BJP and JMM activists clashing Saturday near the Ranchi airport leading to injuries to some people.

After the heckling incident, the Jharkhand Mukti Morcha, which heads a coalition government in the state, had said it will not allow the entry of any central minister into the state. Its workers Saturday protested the arrival of Union Steel Minister Narendra Singh Tomar to lay the foundation stone of a hospital in Jamshedpur.

The jeering of Hooda, apparently by Bharatiya Janata Party supporters at an official function in Haryana's Kaithal town Tuesday in the presence of Modi, riled the Congress and its chief minister in Maharashtra, Prithviraj Chavan, Thursday skipped the function for the laying of the foundation stone of the Nagpur metro rail project by Modi.

Political analysts said that Modi should have intervened effectively to prevent chief ministers from feeling slighted. Senior journalist and commentator S. Nihal Singh said that hooting of chief ministers in the presence of the prime minister does not behove the new central government.

"It is the duty of the prime minister and his party to see that chief ministers were treated with respect at formal functions," Nihal Singh told IANS.

He said Modi should have ensured that BJP elements in the crowd were disciplined. Nihal Singh said that jeering of chief ministers at successive events attended by a prime minister was "unprecedented."

"In a federal system, the prime minister has to respect the highest elected office in a state," he said

Political commentator Neerja Chowdhury said that Modi had been talking of working in a team spirit with chief ministers and should have calmed down people at official events attended by him.

"He should have spoken to the crowd to quieten them. Not doing that aroused suspicion. The situation should not have been allowed to escalate. The prime minister should have intervened more strongly," she said.

Chowdhury noted that hooting of chief ministers had taken place in states likely to face elections in the next few months.

She said state governments may be facing anti-incumbency and elements in the crowd may have started chanting "Modi, Modi" but it was for the prime minister to ensure the dignity of a chief minister at an official function.

"These were official functions for the launch of central schemes to which chief ministers had been invited. The chief ministers represent people of the state till they are in office," she said.

She said chief ministers boycotting events attended by the prime minister "was not a happy situation."

He also alleged that the booing of chief ministers was well planned and "orchestrated by Modi and his party."

Party leader Capt Amarinder Singh accused Modi of being "silent" over hooting of chief ministers, saying it amounted to "consent".

With the ball seemingly in his court following the heckling controversy, Modi Friday sought to reach out to the Congress and invited Hooda for tea at his official residence in the national capital.

BJP spokesperson Sambit Patra said Modi's tea invitation to Hooda was "a very good gesture" and the party had respect for all chief ministers. However, he said that people have a democratic right to dissent and hooting was a form of dissent.

"People have jeered due to non-performance (of chief ministers). Rather than complain, they should introspect why they were hooted and not adopt a posture of confrontation," Patra told IANS.

He said Modi had gesticulated to the people to stop hooting at functions in Haryana and Jharkhand and accused the Congress of being adamant.

"They boycotted Modi even before (general) elections. They are trying to do the same now," he said. "The prime minister has spoken of Team India and of working in unison with states," he reminded.

With Haryana, Maharashtra, Jharkhand and Jammu and Kashmir going to the polls in the next few months, many fear that confrontation might only intensify between the government and the opposition. - IANS