Sushma: Making a quiet statement, but no interviews please! 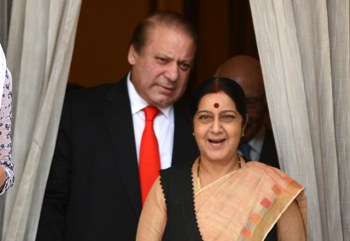 She has already paid a visit to five key neighbours in the nearly three months she has been in the ministry, has interacted personally or on phone with dozens of counterparts worldwide, keeps on top of important issues and rarely missed an opportunity to participate in parliamentary debates despite her tight schedule.

But, like other ministers in the government of Prime Minister Narendra Modi, she is chary of speaking to the press.

Sushma Swaraj, who took over the Ministry of External Affairs (MEA) plus the Ministry of Overseas Indian Affairs (MOIA) in mid-May and is India's first woman foreign minister, has added her own quiet statement to her working style.

Diminutive and elegantly attired in colourful saris with a matching sleeveless jacket and with a large prominent red 'bindi' adorning on her forehead, the minister is known to take personal interest in tracking matters concerning Indians in distress in any part of the world.

As MOIA minister, Sushma Swaraj has already taken a major step to ease the mental trauma of families of Indians whose kin die abroad by launching a portal that will provide them real time information about how the mortal remains of their kin is being transported back home.

The facility has been launched in the 17 Emigration Check Required (ECR) countries, where seven million Indians, mostly from poor families are employed.

While launching the system, Sushma Swaraj said as soon as she took over she was besieged by requests from MPs, including many from Kerala and Andhra Pradesh, to find out ways to help families get back the bodies of their dead kin.

She got officials from both ministries cracking on the job, involved Indian heads of mission of the ECR countries as well as the MPs of the states from where a large number of Indians go abroad to work.

In between her visits abroad, and rubbing diplomatic shoulders with many heavyweight counterparts, Sushma Swaraj has been keenly following up on the plight of Indians stuck amidst the fighting in Middle East countries.

While India managed some deft diplomacy in evacuating the 46 Indian nurses who were stranded in Tikrit, the 41 Indian workers who were abducted in Mosul in Iraq two months ago continue to remain in the captivity of Sunni Islamic jihadists.

The minister has been following up with officials in Iraq and other diplomatic sources on ways to get the Indians freed even during her foreign sojourns.

Speaking in the Rajya Sabha on the subject Aug 4, the minister said: "As far as the 41 people are concerned I would like to say here with responsibility that they are alive and safe. We should not believe in rumours. I have met their families. ..

"Secrecy is the fundamental principle of any such process. We talked to all foreign ministers, all ambassadors from the Gulf and our ambassadors in the Gulf. We also talked with the countries that can be helpful. I am waiting like a mother, who waits for her child, have knocked every door from where we can get help."

During her Myanmar visit earlier this month, during which she participated in her first multilateral event at the ASEAN Foreign Ministers meeting, the East Asia Summit Foreign Ministers Meeting and held seven bilateral meetings, the minister continued to follow up on evacuating Indians in Libya and Iraq.

"She has a more hands-on approach to issues (than her predecessor) and follows up on matters very keenly," an official, who has been with her, confided to IANS.

Known as a keen parliamentarian and a forceful debater, Sushma Swaraj, a former Leader of Opposition, has not let her foreign jaunts come in the way of her parliament participation. She had her visits specially timed for weekends so that she would be back to attend the session and not miss out on any of its working days.

"She has been travelling on Saturdays, so that she winds up work and is back by Monday to attend to work or the parliament session, when it was on," said another official.

But the minister avoids speaking to the press. Unlike her predecessor Salman Khurshid, who would give the media loads of sound bytes, as and when he met them, Sushma Swaraj prefers to let the ministry spokesperson handle questions. She firmly refuses questions from pesky mediapersons, and no interviews either. - IANS