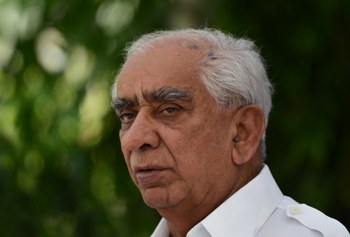 Jaswant Singh, once considered one of the leading lights of the BJP, was in a "highly critical" condition and in coma Friday after suffering from a head injury following a fall at his house here, the government said.

The 76-year-old leader was brought to the Army Hospital (Research and Referral) around 1 a.m. "with injury to his head", the defence ministry said.

The former defence minister's family members "brought him to the hospital after finding him lying on the floor of the house in an unconscious state", the brief statement said.

According to a hospital statement: "At present, (his) condition is very critical. He is on life support systems and under constant monitoring by a team of neurosurgeons and critical care providers."

Prime Minister Narendra Modi was among the first political leaders to speak to the former Bharatiya Janata Party (BJP) leader's family. He also offered prayers for his "speedy recovery".

Doctors said "examination at the hospital showed him to be in coma, with signs of 'raised intracranial tension and a haematoma scalp'.

"Urgent CT scan of the head showed 'an acute subdural haematoma with mass effect, a midline shift and contusion of the brain substance'," they said.

The hospital statement said "a life-saving decompressive hemicraniectomy was done" on Jaswant Singh, who quit the BJP before the Lok Sabha election this year after he was denied a party ticket.

Doctors said they conducted a neurological procedure in which a part of the skull is removed to allow a swelling brain room to expand without being squeezed.

It is usually performed on victims of traumatic brain injury and stroke, they said.

Doctors told IANS that no one has been allowed to meet him till he "fully" recovers.

Born in Barmer in Rajasthan Jan 3, 1938, Jaswant Singh was one of the most prominent leaders of the BJP and was a close associate of its stalwarts, Atal Bihari Vajpayee and Advani.

After serving the Indian Army for nine years, Jaswant Singh went on to play a major role in the Vajpayee-led governments. He was also widely seen as one of the BJP's moderate faces.

Once Modi took virtual charge of the party ahead of the 2014 Lok Sabha polls, Jaswant Singh got sidelined -- and was denied party nomination to contest from Barmer. He fought as an Independent and was defeated.

At his hometown, prayers were being organised for his speedy recovery.

"People here are shocked to hear this news. He is one of the top leaders of the state," said R.K. Singh, a resident of Barmer.

"Prayers are being organised in temples and mosques in Barmer, Balotra and Jasol for his well being. We our sure our leader will soon be hale and hearty," said Mahendra Singh, a local entrepreneur.

In some of the places, particularly Jasol, where Jaswant Singh was born, women with tears in their eyes were seen gathered at temples to pray for his well being.

"He is a fighter and will certainly come out of this soon," said a resident.

Singh was expected to visit Barmer to attend a function Aug 13. - IANS