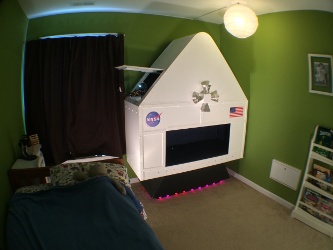 Have you ever thought of building a spacecraft for your kid? Learn from this man who gifted his four-year-old son a NASA spaceship simulator - right in his bedroom!

The spaceship has controls, switches, LED readouts, sound effects, a robot arm and other realistic-looking stuff.

A joystick controls lights and sounds for the engine and thrusters.

The payload bay has a motorised hatch and contains a robot arm that can be remotely operated over video feed to deploy payloads like toy satellites.

Headsets provide an audio link between the spacecraft and Mission Control in the other room.

It has even got a sub-woofer to simulate the feeling of the shuttle taking off, media reports said.

“I decided to build the spaceship after creating a mission control desk a few months back. I thought my kids would need a spaceship to go with it,” the father Jeff Highsmith was quoted as saying.

To obtain all the sounds for the control panel, he scoured NASA’s own comprehensive sound archives, especially the Apollo 11 Flight Journal.

“I used audio editing software to trim, combine, or otherwise edit the sounds,” he said.

"This is not a game itself that can be won or lost, just a fancy prop for my boys to use with their own blossoming imaginations,” Highsmith told MakeZine.com. - IANS