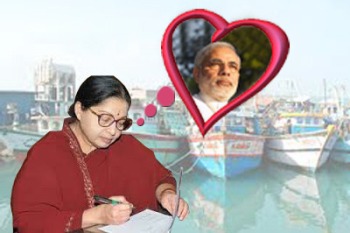 In a damage control exercise after an article on its defence ministry's website created an uproar in Tamil Nadu, the Sri Lankan government Friday tendered an "unqualified apology" to Prime Minister Narendra Modi and state Chief Minister J.Jayalalithaa.

"An article titled 'How meaningful are Jayalalitha's love letters to Narendra Modi?' had appeared on our website along with a graphical portrayal of Hon. Prime Minister of India and Hon Chief Minister of Tamil Nadu," read a statement hosted on the defence ministry's website.

It said that the article "which had been published without appropriate authorization and not reflecting any official position" of the Sri Lankan government or the defence ministry has since been removed.

"We extend an unqualified apology to the Hon Prime Minister of India and Hon Chief Minister of Tamil Nadu," it added.

In a statement issued here Friday, PMK founder S. Ramadoss said: "The article title and the accompanying picture of Jayalalithaa thinking of Modi while writing the letter makes everybody with a conscience to boil."

Ramadoss said the title and the illustration are in poor taste and the Sri Lankan government should be condemned for this.

He also wondered whether Sri Lanka is not intervening in India's sovereignty by publishing such an article on the defence ministry's web site about an elected chief minister of a neighbouring country.

He said if the media in Sri Lanka had criticised the steps taken by Jayalalithaa on the fishermen issue, then it can be allowed under the freedom of the press.

According to Ramadoss, the visit of Bharatiya Janata Party leader Subramaniam Swamy to Sri Lanka and his views against Tamils and Tamil Nadu has emboldened the island nation to publish such an article.

MDMK leader Vaiko also said the article and the illustration shows the perversion of the Lankan minds.

He demanded the Indian government to take severe action against Sri Lanka and break diplomatic relationship with the island nation.

The opinion article written by Shenali.D. Waduge starts with "Hell hath no fury like a woman scorned they say and that aptly puts to context the feelings of Jayalalithaa towards Sri Lanka."

"But, the BJP high powered delegation led by Dr. Subramaniam Swamy who arrived in Sri Lanka at the invitation of the Bandaranaike Centre for International Studies recently made explicitly clear that Tamil Nadu would not come between Indo-Lanka relations and also thanked the Sri Lankan president for arresting but releasing the Indian fishermen while confiscating the boats," the article said.

According to the author, the boundary line between India and Sri Lanka is a settled issue and the Tamil Nadu government should look at alternative ways to secure the livelihood of its fishermen following its marine bed destroyed due to bottom trawling.

In the article, Waduge writes that Jayalalithaa is "attempting to dent the popularity of the Indian prime minister while also disturb the amity that is being built between the two nations".

"Her actions are obviously aligned to the undiplomatic and unscrupulous policies followed by the Sonia-led Congress government where the central government of India was virtually kept strangulated and on a noose by successive Tamil Nadu governments."

"Tamil Nadu Chief Minister may learn sooner than later that Narendra Modi is not a puppet to dance to her tantrums or threats," the author said.

On the other hand, the Lankan defence ministry has carried disclaimer at the bottom of the article saying: "The Ministry of Defence bears no responsibility for the ideas and opinion expressed by the numerous contributors to the Opinion Page of this web site." - IANS