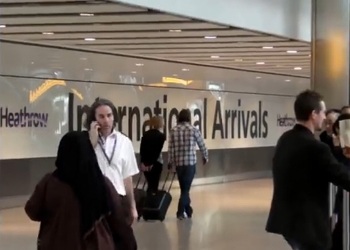 An Indian student has won 3,500 pounds ($5,967) in damages for her illegal detention at Heathrow Airport in London, media reported.

Swathi Palisetty, a student of the University of Bedfordshire in Luton town, was held for 17 hours by suspicious UK Border Agency (UKBA) officials at Heathrow after she returned from a trip to India in December 2011.

Palisetty was later flown to Hyderabad in India after the detention ordeal.

A British high court heard that the agency had wrongly concluded Palisetty was not registered at her university college, BBC reported Tuesday.

Palisetty sued the Home Office over her detention, saying she had been blocked from Britain on the mistaken basis of working as a nanny.

The judge issued the verdict in her favour and told the British Home Office to pay 3,500 pounds in damages.

The Home Office was also ordered to pay 568 pounds for the cost of her flight back to Hyderabad.

Palisetty's barrister contended that the Border Agency's assumption that she had been working was "unjustified" and its officers had failed to check the visa database or make direct inquiries with the university.

During the court proceedings, the Border Agency contended that Swathi was not able to provide agency officers with details about her course modules.

The student of computer studies also did not have a good grasp of English when she tried to return to Britain from India, the report said.

The University of Bedfordshire removed her from its register after she was allowed back in Britain late 2012.

The University told the Home Office that they were not confident about Palisetty's ability to continue the course and therefore did not reinstate her.

Palisetty was flown back to Britain "at public expense" in March 2012, so that she could take her exams.

Palisetty also claimed that her detention had contributed to her failure to get her degree but the high court rejected her attempt to recover the course fees, the report said. - IANS