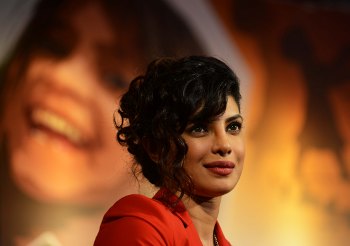 A proposal to this effect was being given final touches and the National Film Award winner has given her consent, union Textile Secretary Zohra Chatterjee said during her visit to Varanasi, the parliamentary constituency of Prime Minister Narendra Modi.

While the Bararasi silk saris would be at the forefront of this branding, the larger branding by the actress would be for the Indian handloom industry, officials told IANS.

The union government wants to promote the 'desi' handloom and textile industry in a big way the world over and a "detailed publicity campaign is being planned for the same," a senior bureaucrat told IANS.

The union government, it is learnt, is also toying with the idea of opening a National Institute of Fashion Technology (NIFT) in the temple town after which the products of the weavers in the city would be "integrated and upgraded" with the help of the institute, officials informed.

Keeping up with his promise made during the campaigning of the Lok Sabha elections, Prime Minister Modi reportedly has also asked the textile ministry to explore options for early setting up of a trade facilitation centre, officials said.

The high-profile constituency is under active focus of the union government with most ministries deliberating on various developmental, welfare and job-creating schemes in Modi's constituency. - IANS